Dresden, what you should not miss!

Home/Dresden, what you should not miss!
Previous Next

Dresden, what you should not miss!

In this blog we will show you the beauties of Dresden. The outstanding city of culture and art in Free State of Saxony in Federal Republic of Germany.

We didn’t plan this trip in advance. Maybe because of that we didn’t have any big expectations. This city totally surprised us in a positive way. The weather forecast anticipated sunny weather. So let’s go to Dresden the first German city we visit together 🙂

We set off for a journey from Prague after 10am. From Prague it is around 150km. The journey takes approx. 1 hour and 30 minutes.

On the journey we pass Říp mountain. According to legend forefather Czech look out of this mountain and said that he and his fellows Czechs will settle here. After one-hour ride we are at the Czech-German border s. Passing the border control we are entering Germany. Finally we can use unlimited velocity to Dresden.

Heading to the main train station Hauptbahnhof  to park our car there in underground parking. The price for parking was fair, only 3 EUR per 5 hours. There are plenty of policemen in front of the station. At first, we did not what is happening here. Later we found out that home football club Dynamo Dresden played against Magdeburg. We clearly heard footballs cheering from the nearby stadium 🙂

Dresden is the capital of Free State of Saxony. The population is over 530.000 inhabitants. It is the 11th biggest city in Germany. This is home to culture and art with more than 50 muzeums and more than 35 theatre. During the World War II it was Dresden that was bombed the most of all German cities.  It became part of East Germany.

How to get to the city centre

We walk the Pragerstraße from the Hauptbahnhof, cross the tram track and walk the Seestraße. In couple of meters a huge square appears in front of us the Old market (Altmarkt). Strolling through the stalls with curiosity we watch what merchants offer. 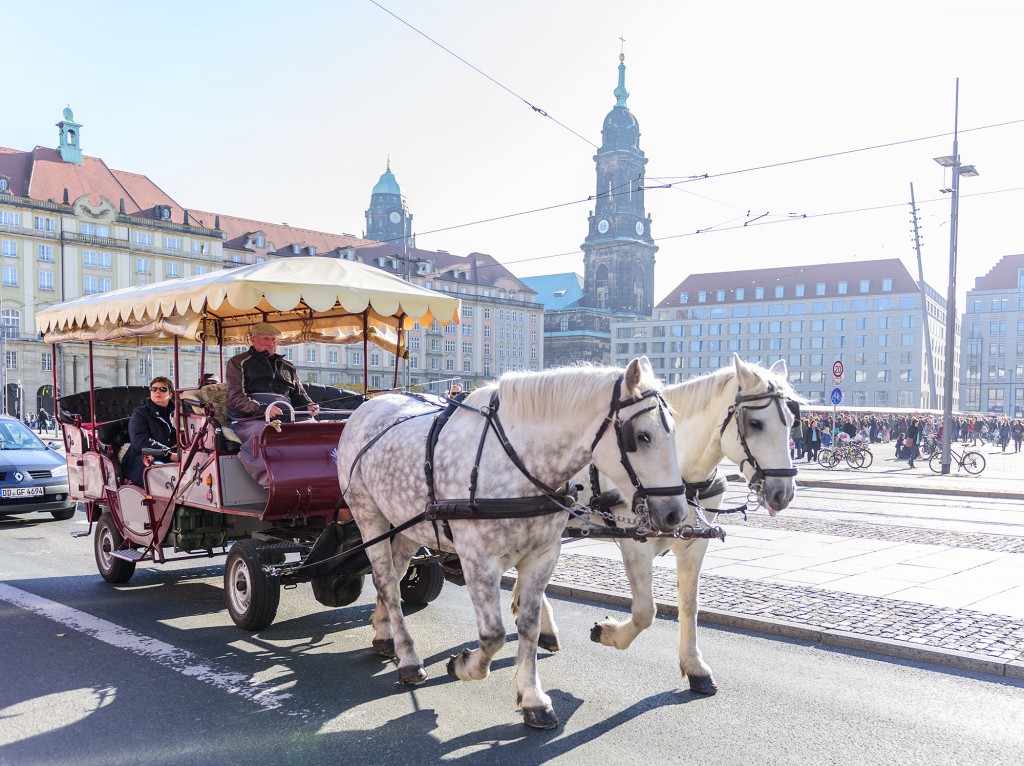 Another tram track and we continue to the old historical town through Schloßstraße. 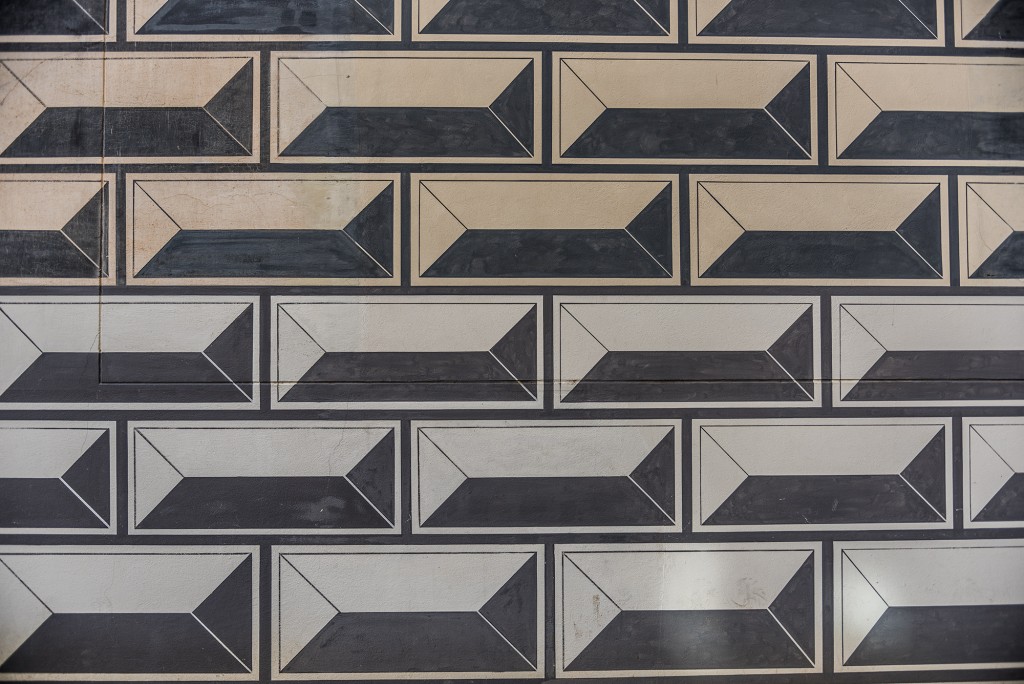 Another amazing piece of art is pictured on the will in the Augustusstraße. So called Fürstenzug, Saxon rulers in chronological order are displayed here. From Margrave Conrad (12th century) to George I Saxon, the king of Saxony (early 20th century). 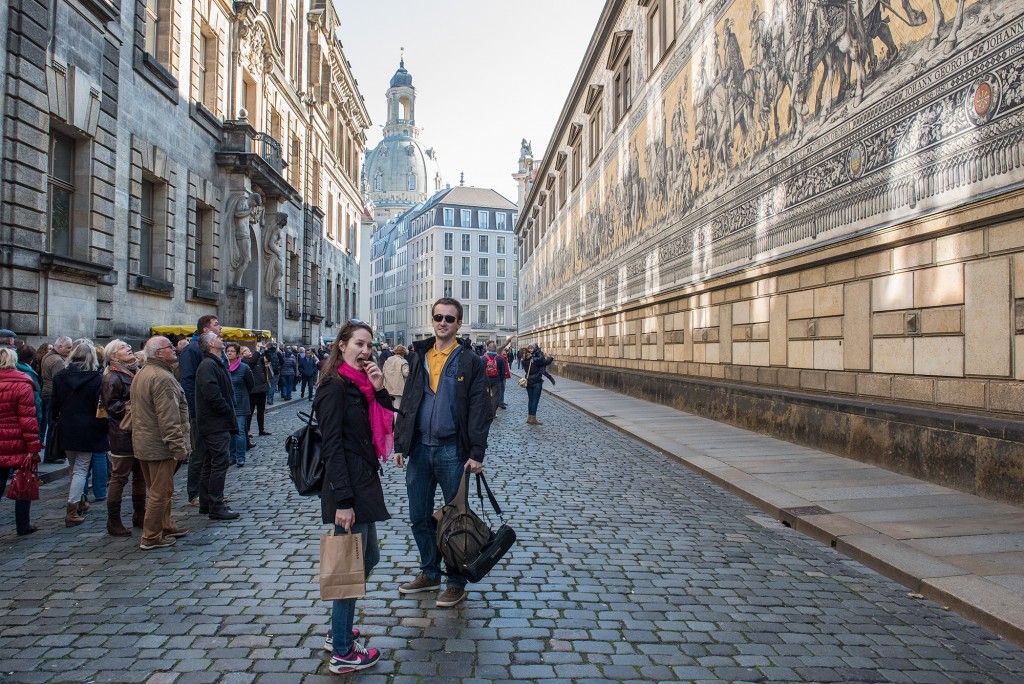 After  Augustusstraße we continue to the Frauenkirche. This Lutheran church built in baroque style in the 18th century. The church was destroyed by allied air strikes on the 13th of February 1945. Dresden lost its landmark. For many years the Frauenkirche rested in ruins. In 1991 the complete reconstruction commenced. Not until 2005 the Frauenkirche was restored to its pre-war appearance. 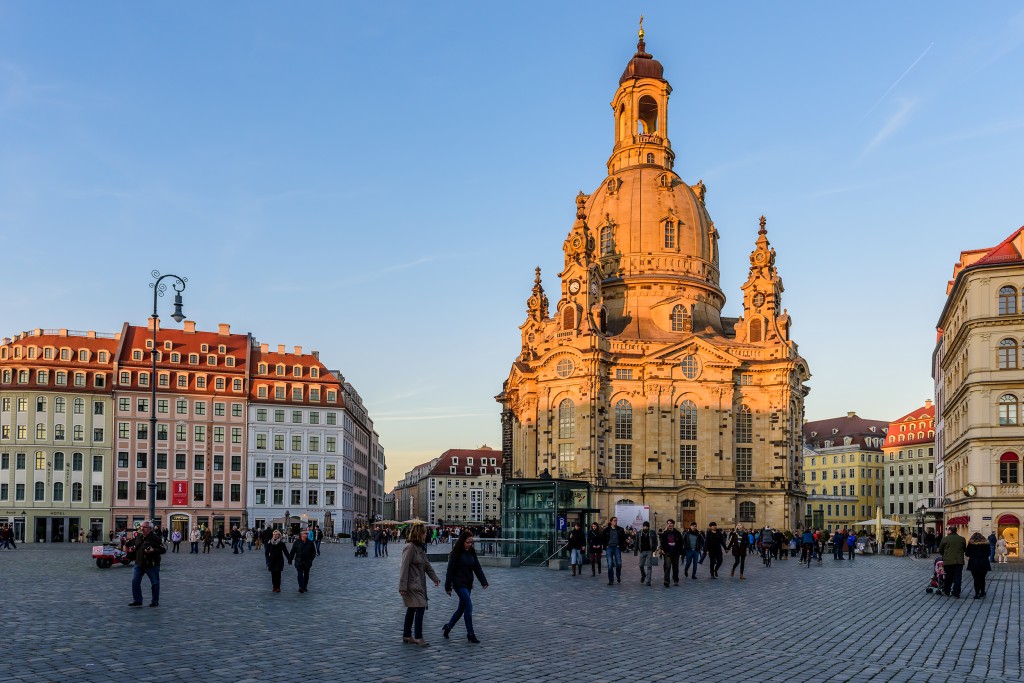 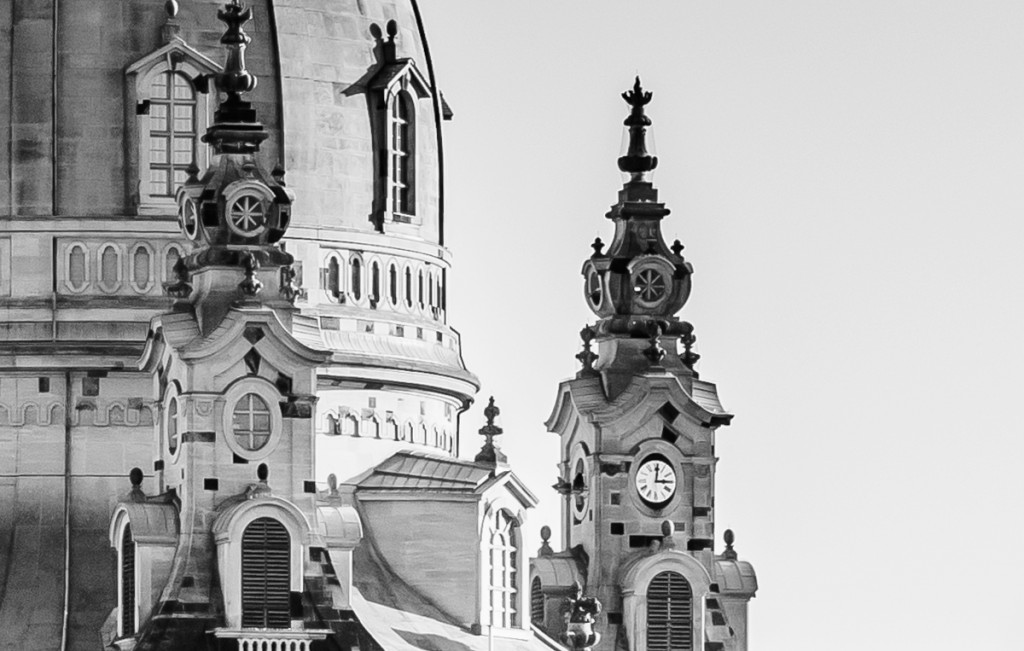 Detail of Church of the Holy Mary, Dresden 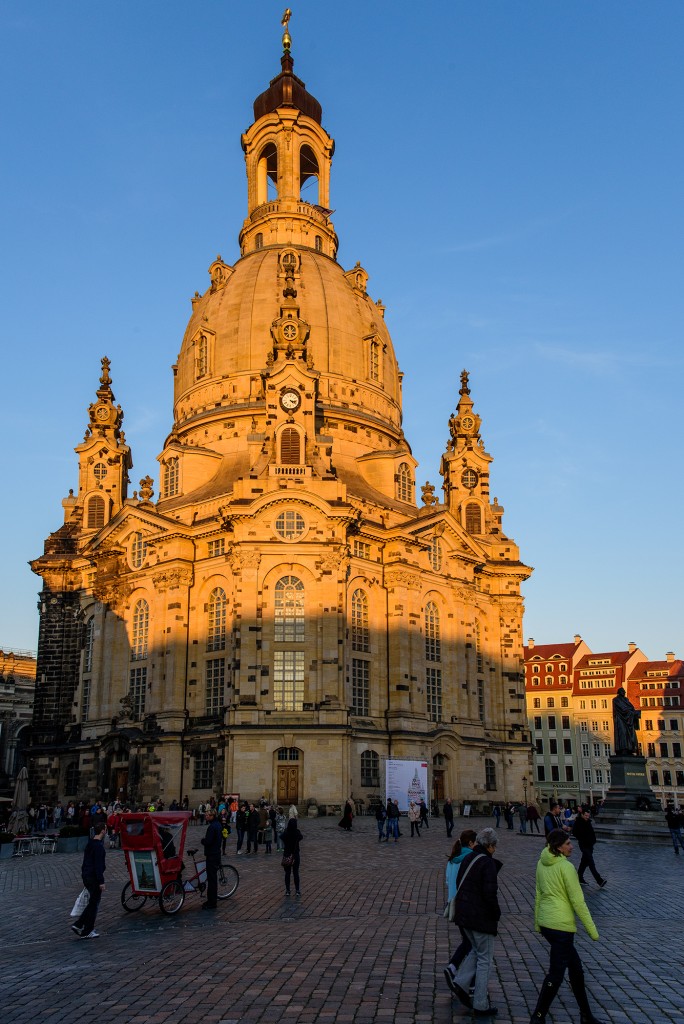 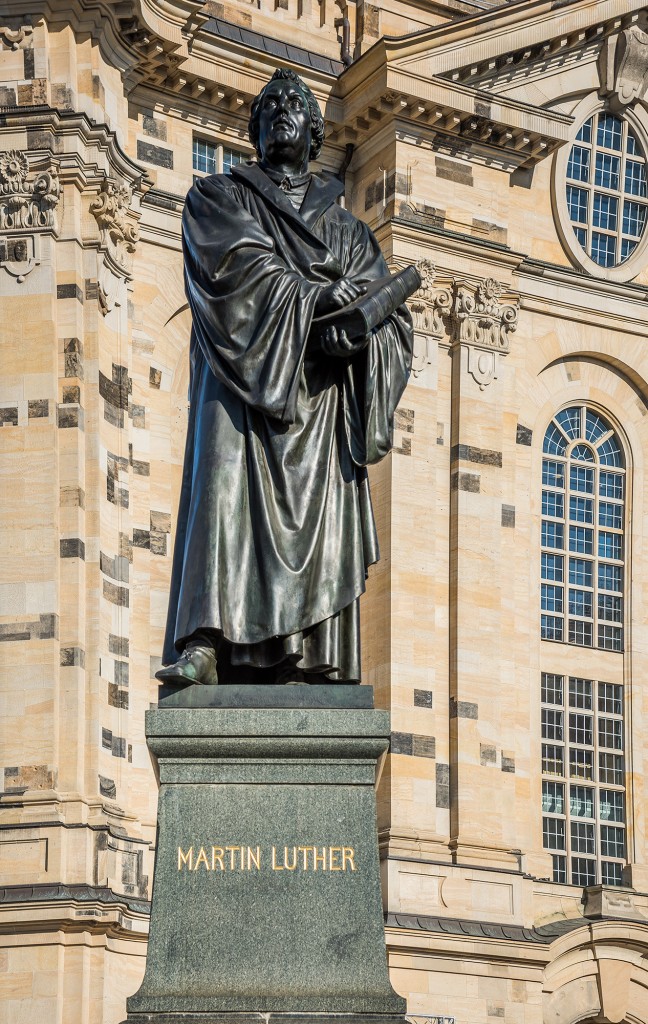 Statue of Martina Luther in front of Frauenkirche

We had taiditional Saxon lunch at this amazing restaurant just nearby the Frauenkirche. The restaurant named Pulver Turm seats at historical powder tower. Its interior reminds the old times with exhibition of amours. You can try amazing Saxony cakes that serve here. 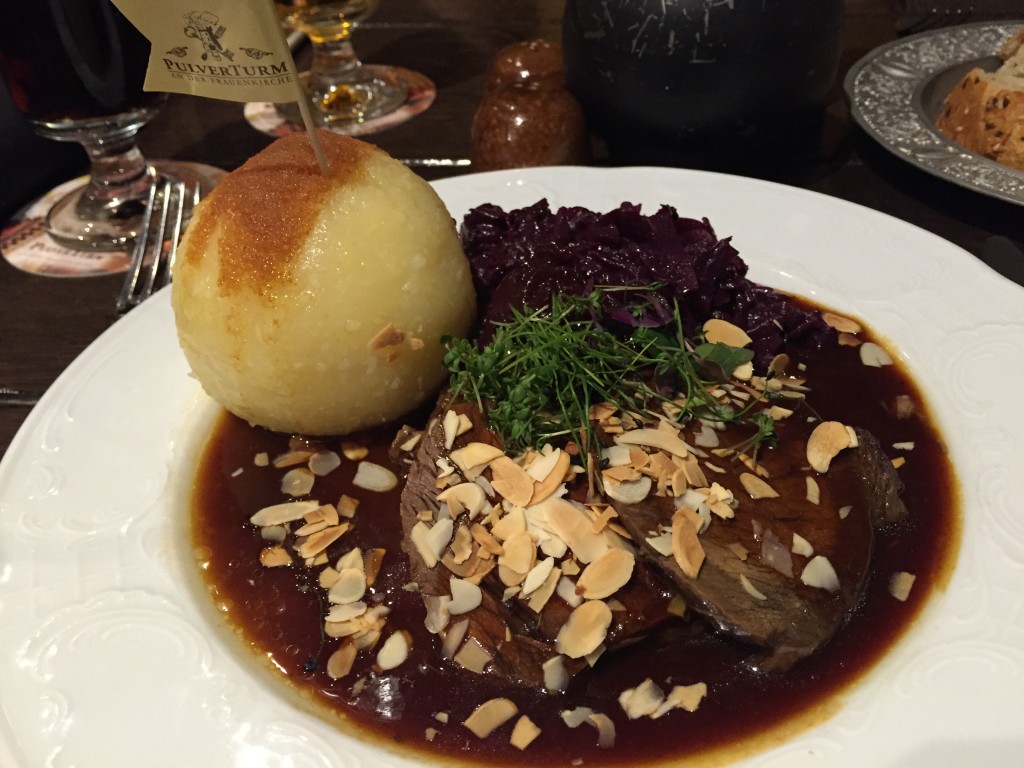 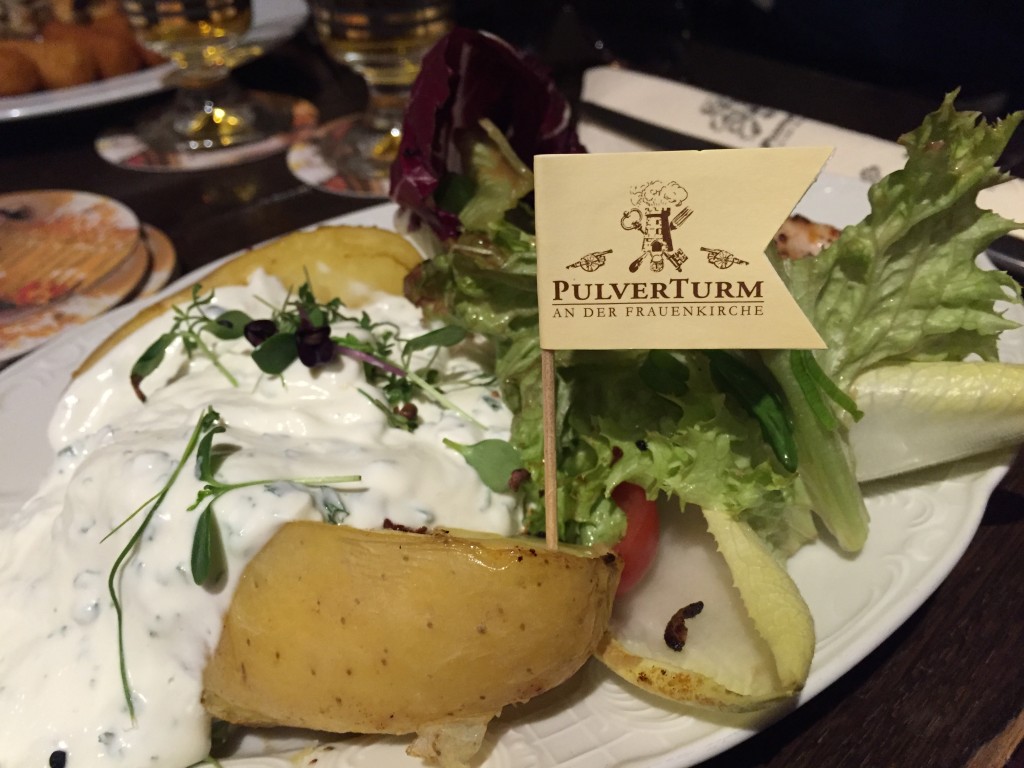 Balcony of Europe or Brühl terrace

After excellent  food our group continue to the “Balcony of Europe” or in other words the “Brühl terrace”. You can have nice view on the river Elbe and other bank of the city – Neustadt district. Adopting decision to go there we pass the Carolabrücke over the river.

As we pass over the bridge somewhere in far distance lies the Waldschlösschenbrücke. Because of this new bridge that alledgedly destroyed the panorama of old town, Dresden was withdrawn from the UNESCO list  of World Heritage Sites in 2009. It is only the second site in the world that was withdrawn from this list. We doubt that people that adopted such decision had ever been in this city… 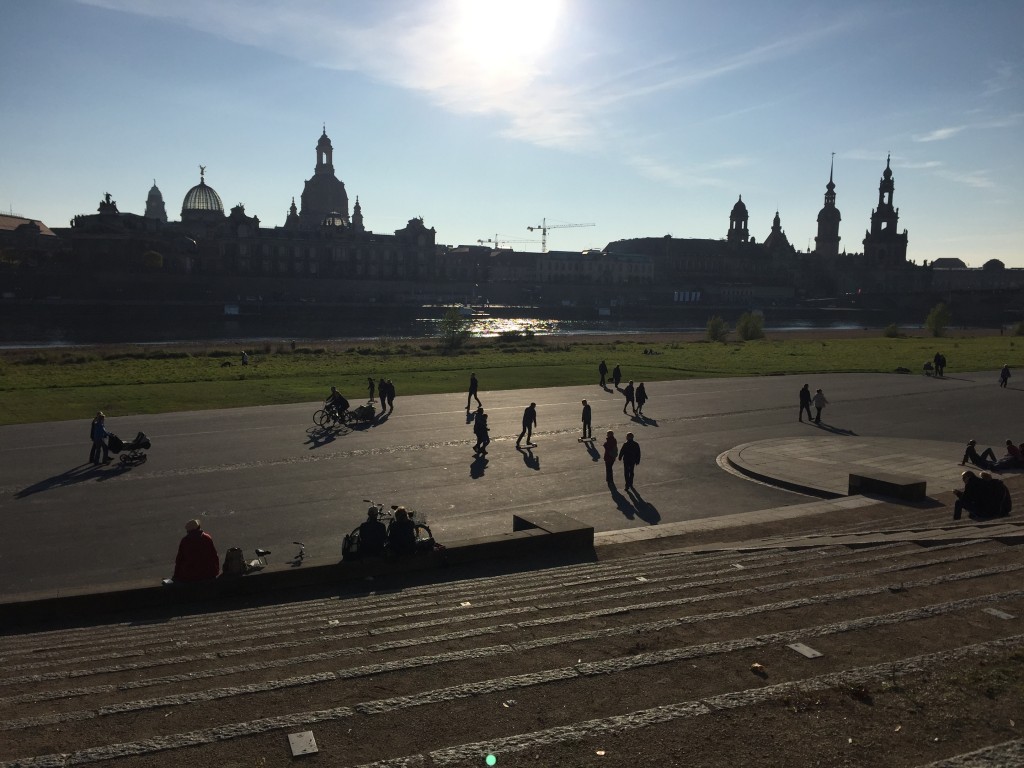 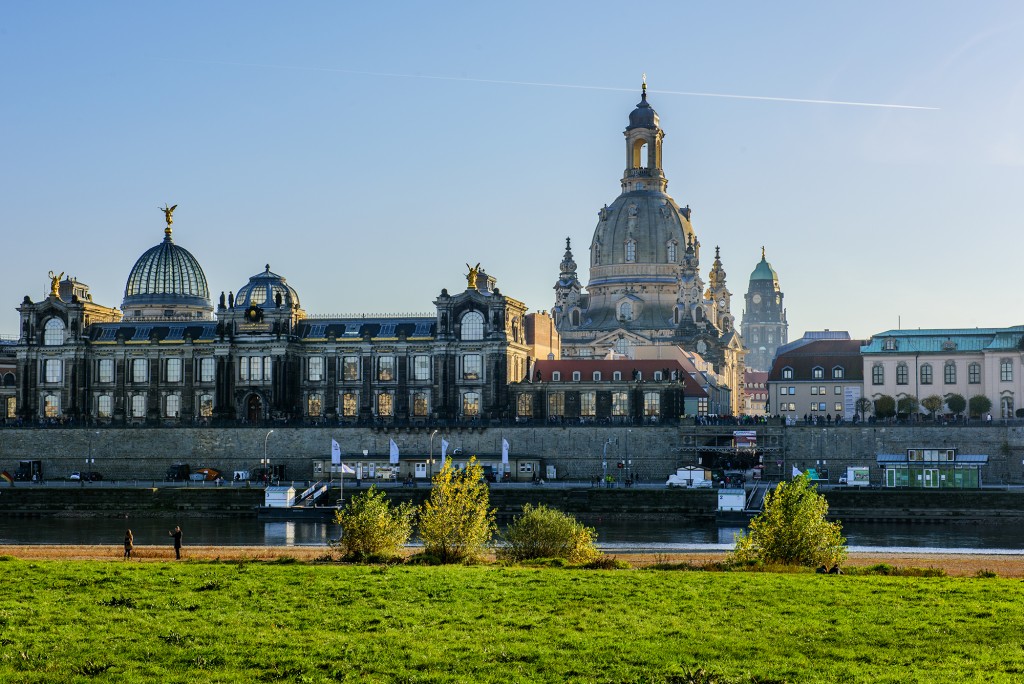 Dresden panorama with its landmark Frauenkirche

Relax by the Elbe river

On the riverbank of Elbe river people are listening to music, chat on the stairs, do skateboarding, ride bicycles, push carriages, fly a kite or just walk. We relax and enjoy friendly atmosphere.

After a while we continue our walk and croos the Augustusbrücke. The sun slowly sets and its ideal time to take photos. 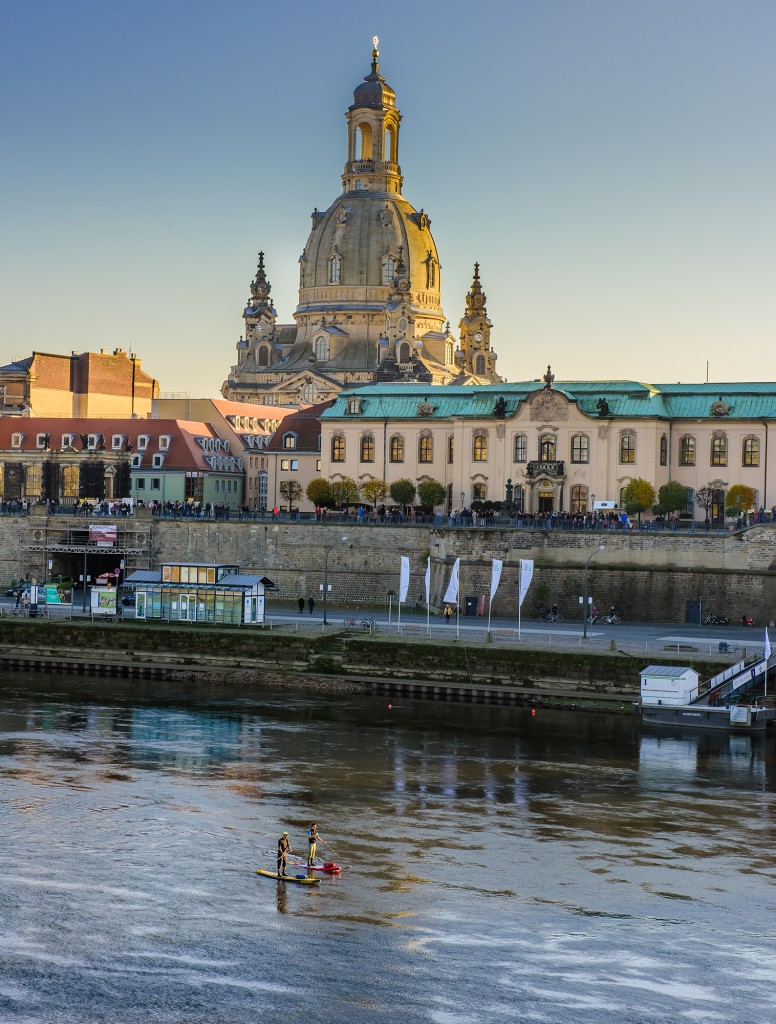 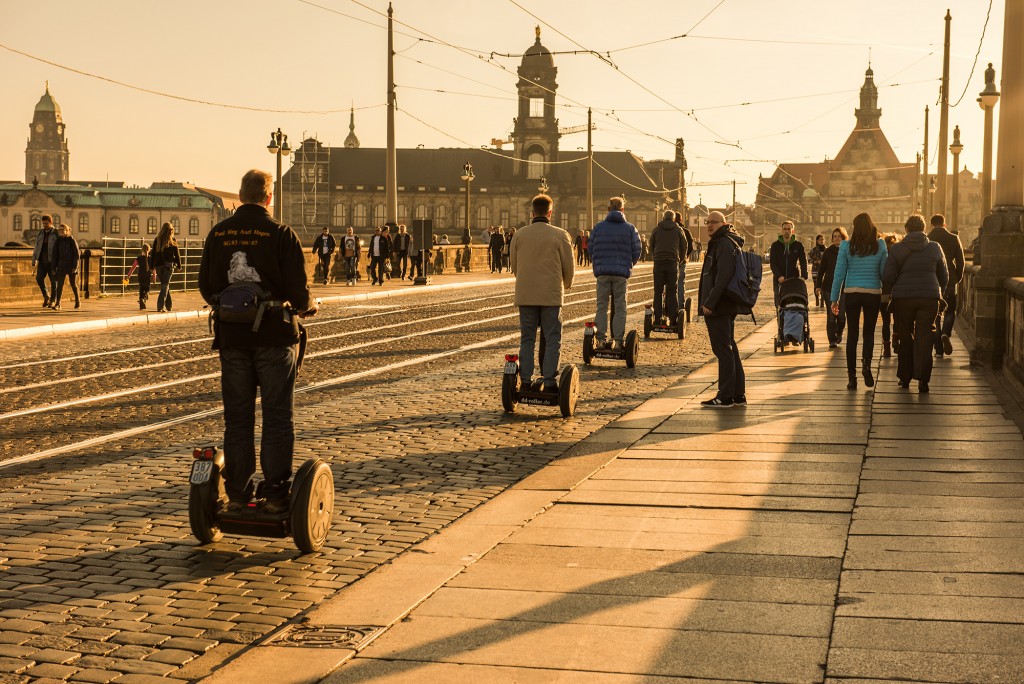 Segway on the bridge

As we pass the Augustusbrücke we stand in front of roman catholic church the Katolische Hofkirche (Dresden Cathedral or Cathedral of the Holy Trinity). This church was built in 18th century and as well as the Frauenkirche was heavily damaged during WWII. Reconstructed in 1965. 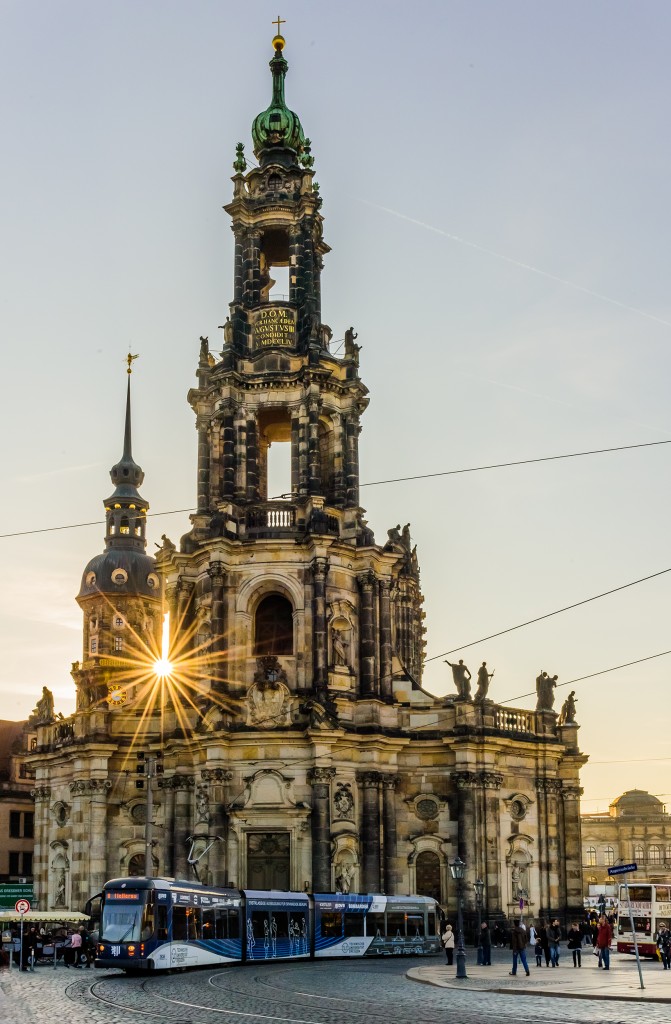 From Katolische Hofkirche or Dresden Cathedral it’s only hundred meters to Semperoper (Saxon state opera). It was reconstructed in 1985. Eastwards from opera in distance of couple of meters amazing Zwinger palace lies. Zwinger built at the beginning of the 18th century on the order of Elector of Saxony and Polish king August II the Strong. This marvel of architecture was also bombed during the World War II and heavily damaged. It was restored to its pre-war state not until 1963. 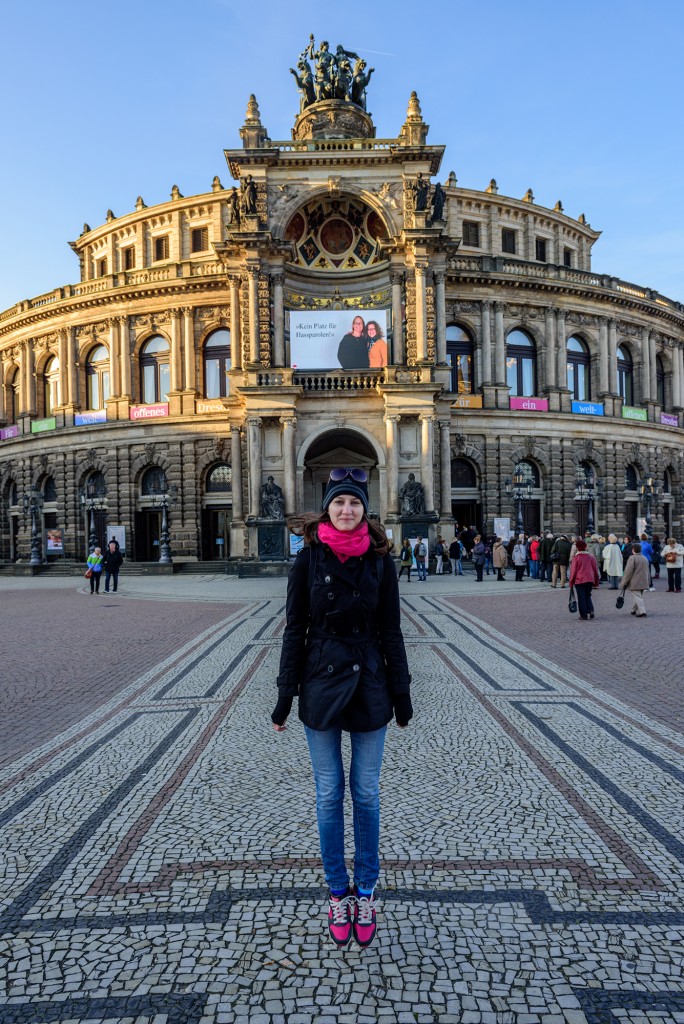 In front of Semperoper, Dresden 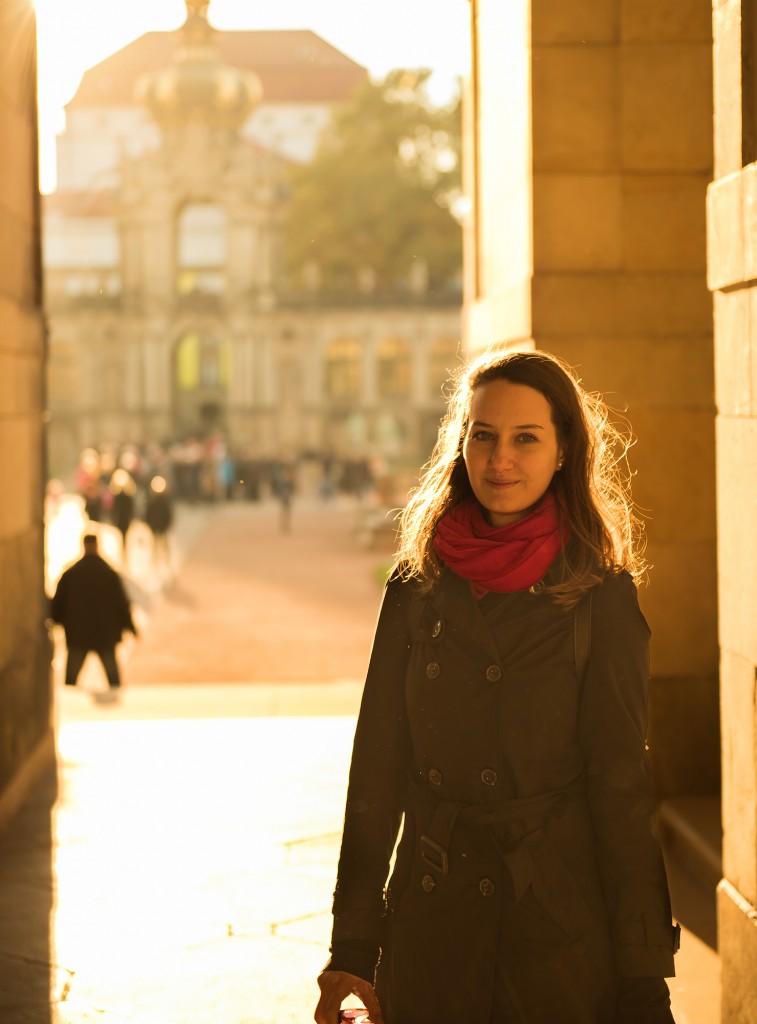 In front of gate to Zwinger

The entrance to the garden of Zwinger palace is free of charge. You can admire here amazing master architecture in its pure beauty. 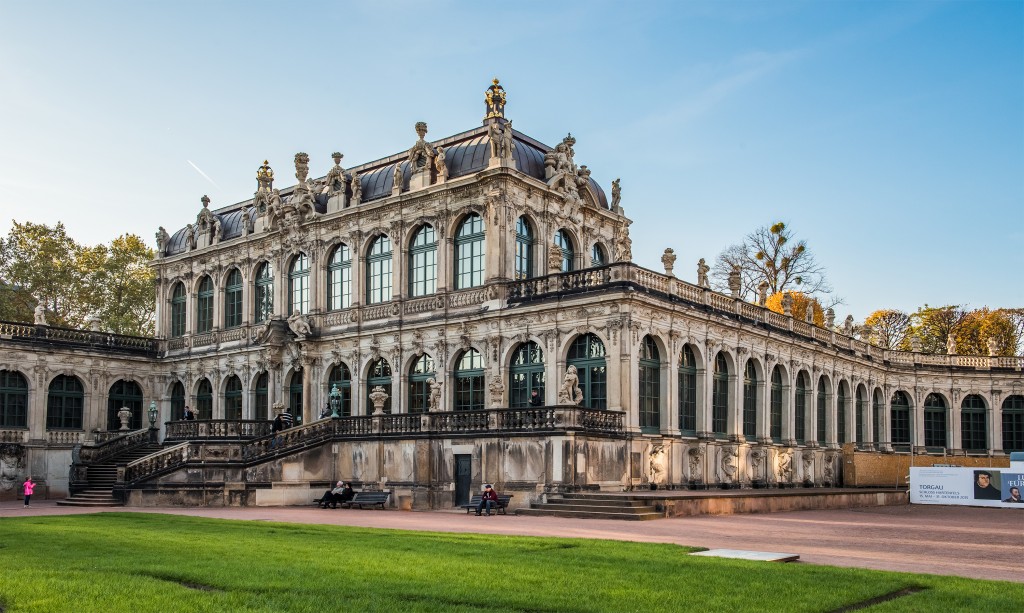 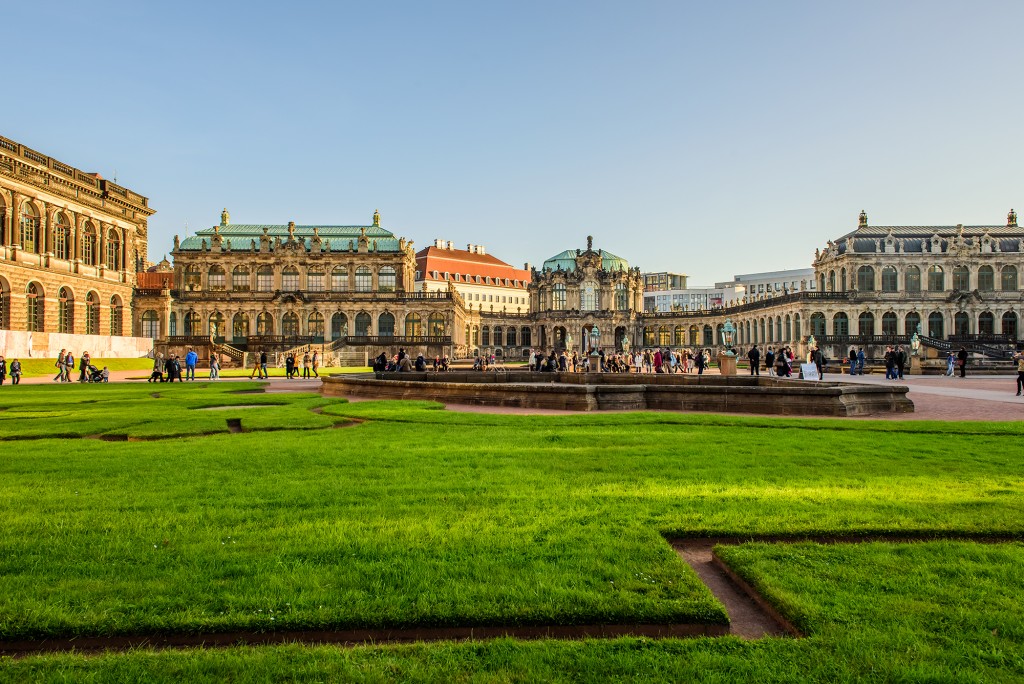 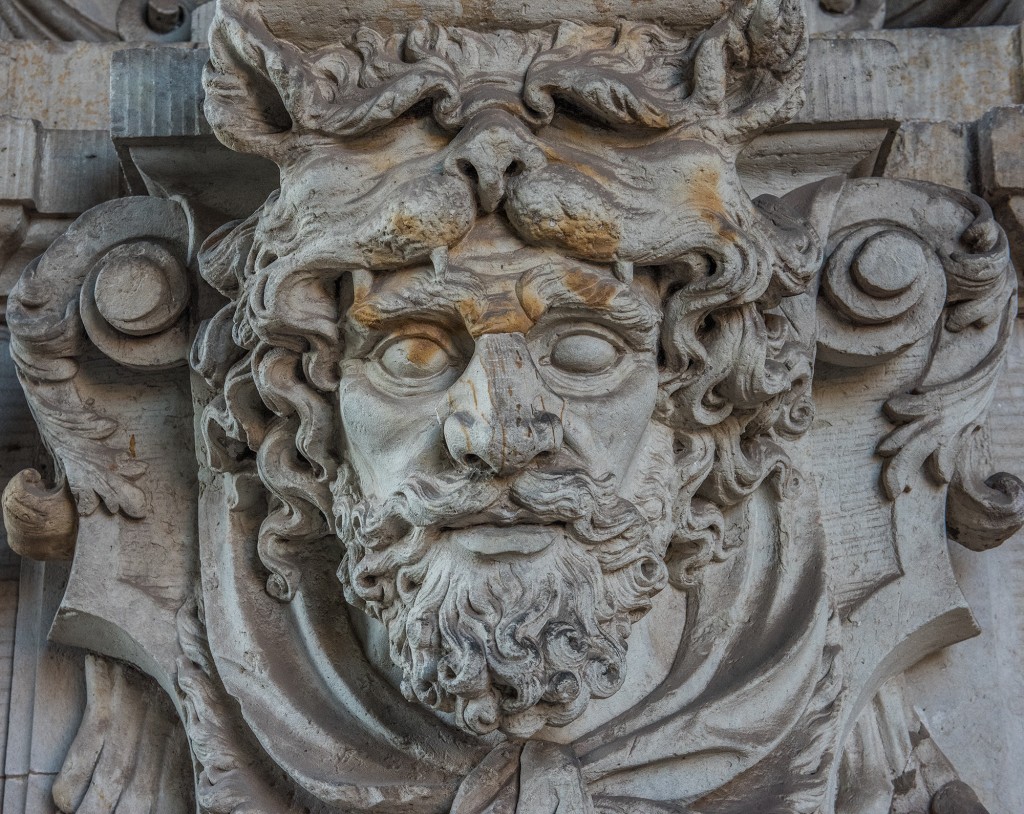 One day for Dresden is not enough. Unfortunately, we didn’t have more time. However, we hope that we will come back to this beautiful city on river Elbe in the future again 🙂