Thailand: 3 beaches of Phuket we have visited

Home/Thailand: 3 beaches of Phuket we have visited
Previous Next

Thailand: 3 beaches of Phuket we have visited

Phuket is the biggest island in Thailand located in the western coast of south Thailand in Andaman sea. Well, it’s 850 kilometre long way from Bangkok. During winter (december to march) in Europe, Phuket is in its peak season with temperatures over 30 degrees Celsius and lots of sunny days. Read in this blog about 3 beaches of Phuket island that we have visited.

How to get here? The fastest means of transportation is by plane. Airport is in the north-western part of the island. Severel airlines fly to Phuket island. You can get here from Europe with only one stop. In Dubai (with Emirates airlines). You have multiple choices from Kuala Lumpur or Bangkok. The cheapest way is to take low-cost airline such as AirAsia or Malindo Air.

Transport from the airport

Be prepared that immediately after you exit the arrival hall, number of taxi drivers, various agents and other people will offer you transport. Don’t panic. Don’t take the first offer, it’s probably exaggarated. And don’t let them influence you. Keep calm and compare the prices for transport. You can get to the beach you want to go by bus, by van or by taxi. Count that the traffic from the airport may be disastrous. The roads are narrow and often crowded with cars. Therefore the journey to Patong beach, which is only 35 km from the airport, may take you more than 1 hour.

During our stay on Phuket island we decided not to remain in one place. We moved from one beach to other. But which beach is worth the visit? Each is different, each has its pros and cons. However, all beaches have two things in common. All of them are worth the visit even though from different reasons. And all are situated on the western coast of the island 🙂 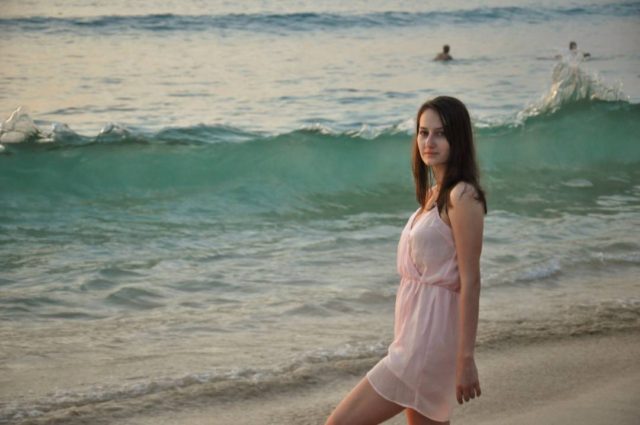 Probably the most famous beach of the island. The majority of tourist coming for vacation to Phuket end on this beach. If you are not a fan of overcrowded beaches and you don’t want to say: “Ah, I should  rather have gone to Ibiza.” bypass this beach. On the other side if you love night life then this is your place. Patong beach is well-known for its energetic, wild night life. After dark, it’s on. Incredible variety of restaurants, pubs, bars, cafés, discos focuses on Bangla road. 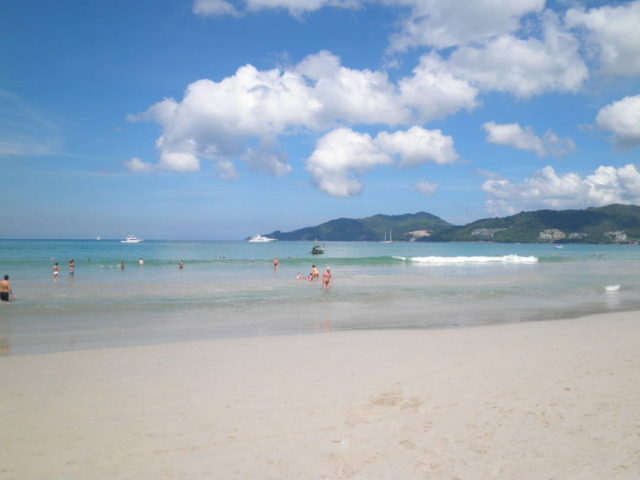 The snad on the beach is mostly white-yellowish, no difference from European beaches. I mean, not so powdery and white as flour, like in Boracay, Philippines, and not so grainy and massive as semolina, like in Ko Lipe, Thailand. Entrance to the sea is gradual. The sea is not so clear. This maybe caused by the season or overcrowding. The beach is from the restaurants, cafés and shops separated by busy road.

If you pass over a hill you will get to the next beach. Karon beach is from Patong beach only 15 minutes ride. Karon beach is much quieter beach. No sun decks head-to-head style as it is in Patong beach. In the northern part of the beach the entrance to the sea is steep. As you move southwards the entrance to the sea changes so that on the southern part you enter shallow sea. Mainly in the part called Hat Karon beach. Night life like in Bangla road doesn’t exist here. You will find here restaurants, shops with souvenirs and fruit stalls. 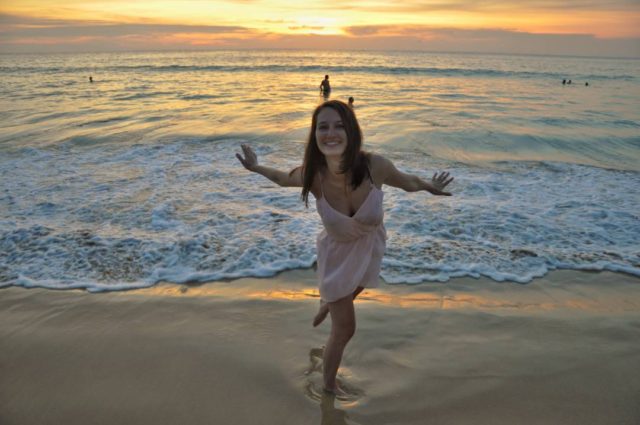 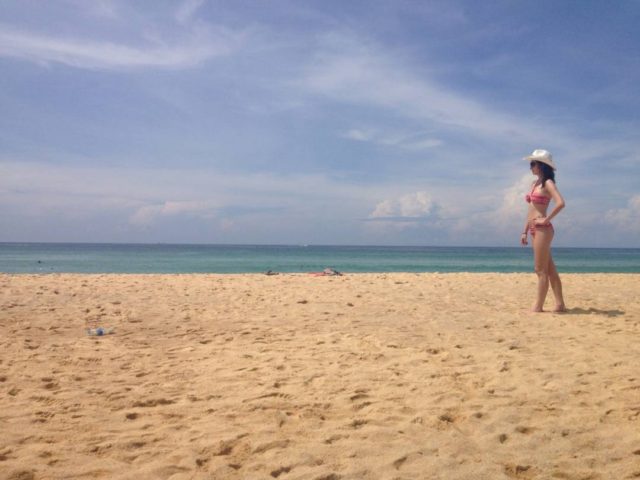 Loi Krathong reached us on this beach. At night, people put on the lake beautifully decorated floral wreaths with lit candles and aromasticks so called krathong. Date of this festival is movable. It falls on the full moon day of the twelfth month of the traditional Thai calendar. In our calendar it falls on the one of the November days. 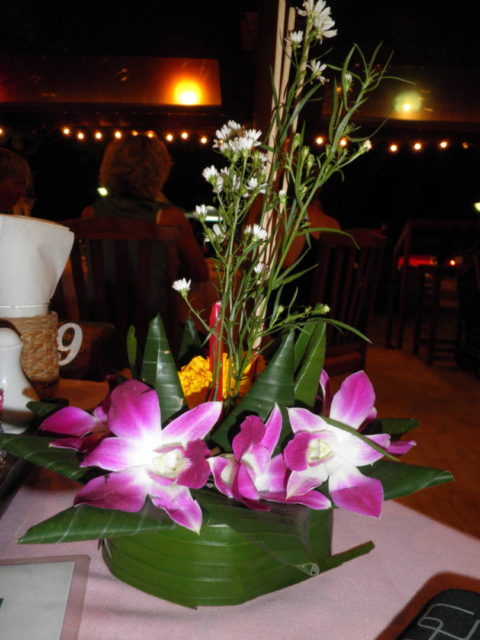 Loi Krathong, made of banana leafs, flowers, candles and aromasticks 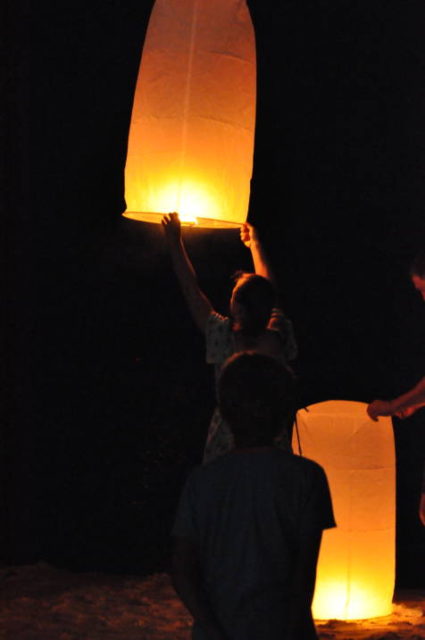 Flying of lanterns of luck during Loi Krathong

Be careful in the northern part of Karon beach!

Be aware that in the norhern part of the beach occur dangerous rip currents. Rips currents will pull you away from the coast to the sea. Don’t panic. Let the current drift you away. Don’t fight with it, don’t swim against it. Swim parallel to the coast. And you will get out of the current. 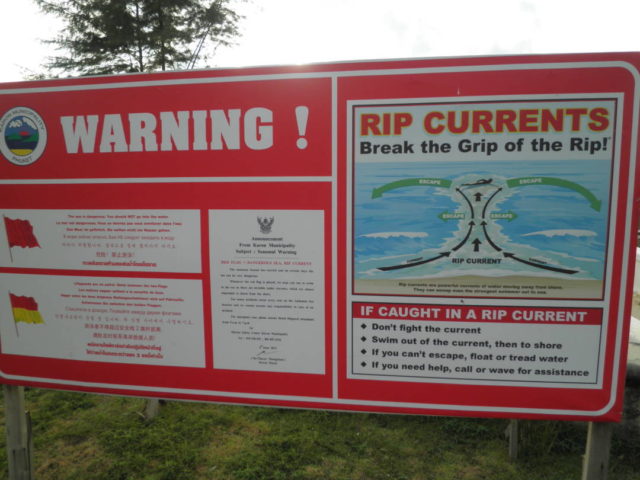 Warnings on the Karon beach

This beach is the norhernmost beach we have visited during our stay on Phuket island. We chose Nai Yang beach because it is so close to the airport 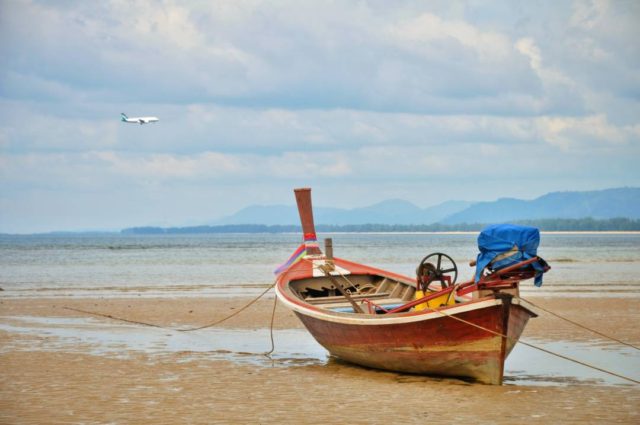 Nai Yang beach is quiet beach that we recommend to people that want to completely relax and charge their batteries. No crowds. Entry to the sea is fully gradual. During low tide the sea retreats hundreds of meters from the coast. You can take a walk on the seabed. If you want to avoid busy areas like Patong beach, this is the right choice.