7 places what to see in Belgrade, Serbia

7 places what to see in Belgrade, Serbia

When I first visited Belgrade 8 years ago, I felt like I was travelling in time. Serbian capital reminded me my city – Bratislava in early 90s. Streets were full of old buses, lot of abandoned and ruined buildings, the city was cold and gloomy. Since then Belgrade has gone through changes and surprised me a lot….and I mean in a highly positive way 🙂

I could observe how the city changes during my visits. Despite the fact that I roamed the city  many times, I must admit that Belgrade is one of the places (maybe the only one) where I have problem with navigation in my head. Belgrade has numerous boulevards, streets and aisles that crank, take you up the hill and down….well, it happened few times that I went astray a little bit 🙂

In this blog I write about those places that are worth to see in Belgrade.

The first thing you should experience in Belgrade is the unique atmosphere of football derby match between two main rivals Crvena Zvezda Belgrade and Partizan Belgrade. Home stadiums of both clubs are only couple of meters from each other. Fans cheer their clubs the whole match with their hymns, songs and chants, making choreography and sometimes they use pyrotechnics on the stadium. Crvena Zvezda fans known as Delije and fans for Partizan known as Grobari. Safety precautions before, during and after the derby are huge and on the highest level. Experience from the fan’s view are unforgettable! 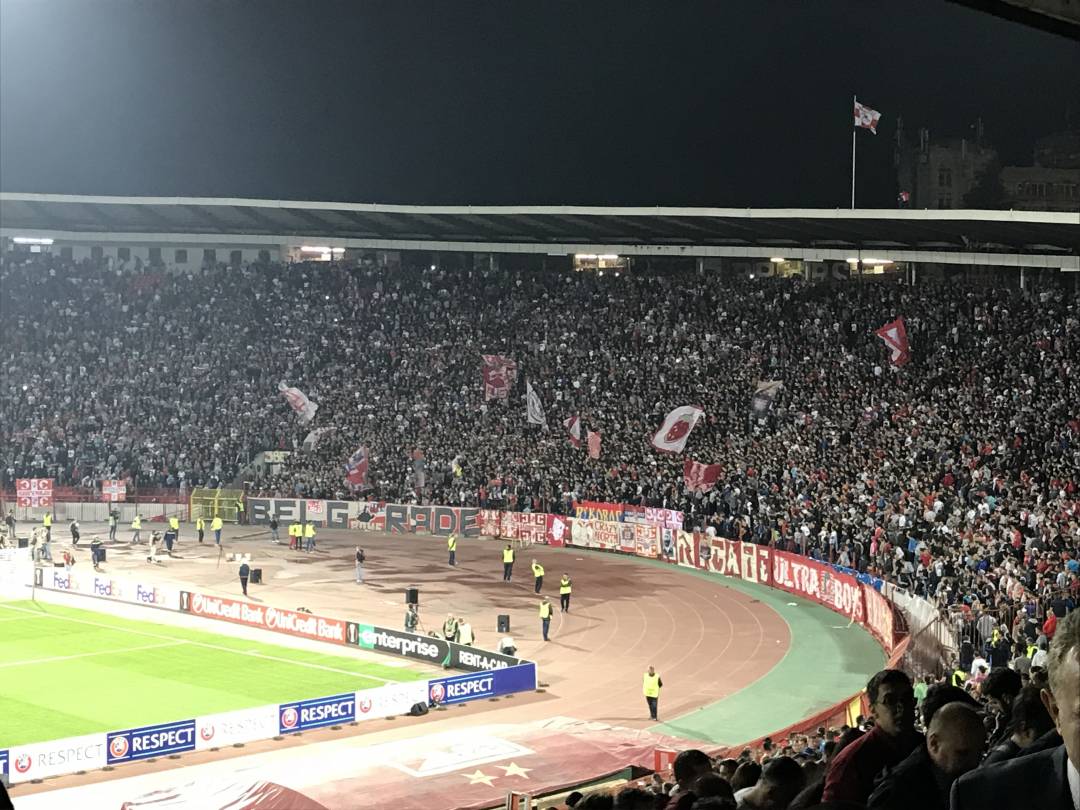 Rajko Mitić stadium where CZ Belgrade has its home

When you are in Belgrade try to go to a basketball match. Crvena Zvezda regularly plays Euroleague in Kombank arena or smaller Pionir hall. Constant cheering of Zvezda’s fans with their chorals will pull you in to this sport even if you aren’t basketball fan. 🙂 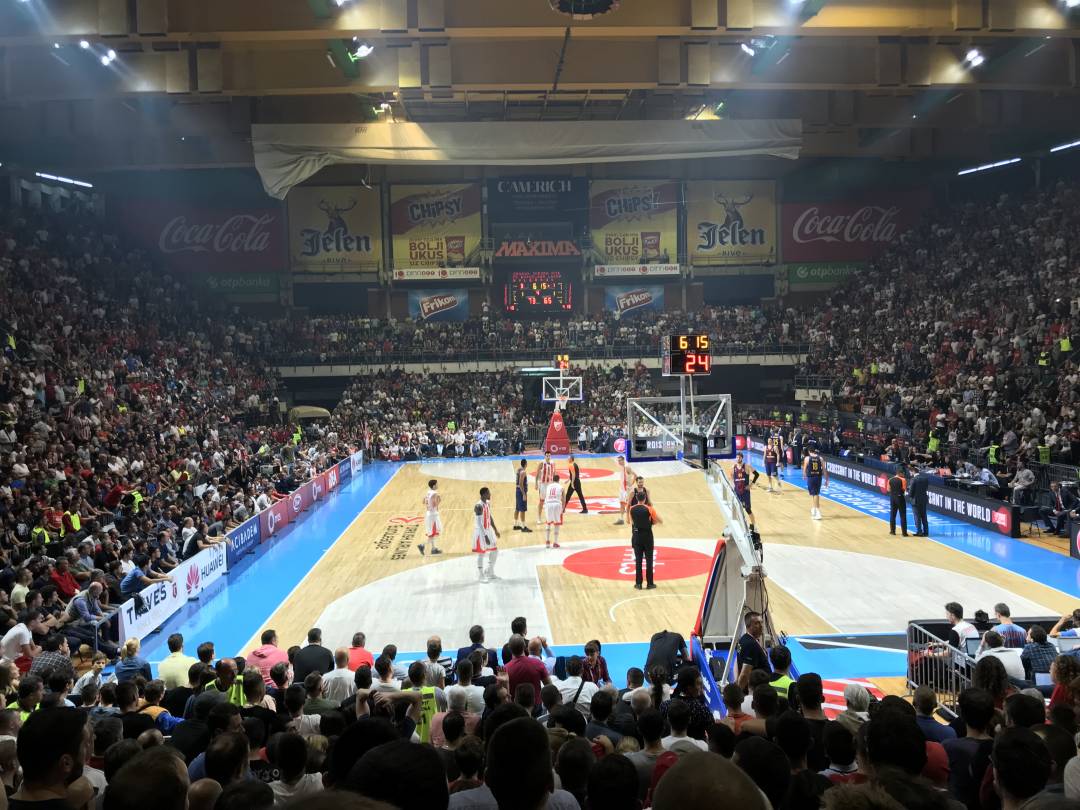 Pionir hall. It’s worth to visit basketball match in Belgrade in Euroleague

Kalemegdan, is a fortress in Belgrade above the confluence of river Sava and river Danube.  This is definitely the number one sight in Belgrade and place I visit everytime I’m in Belgrade. In the medieval times it used to be important fortress which was conquered by Ottomans in 1521. You can find beautiful park where you can walk, run or enjoy your day. 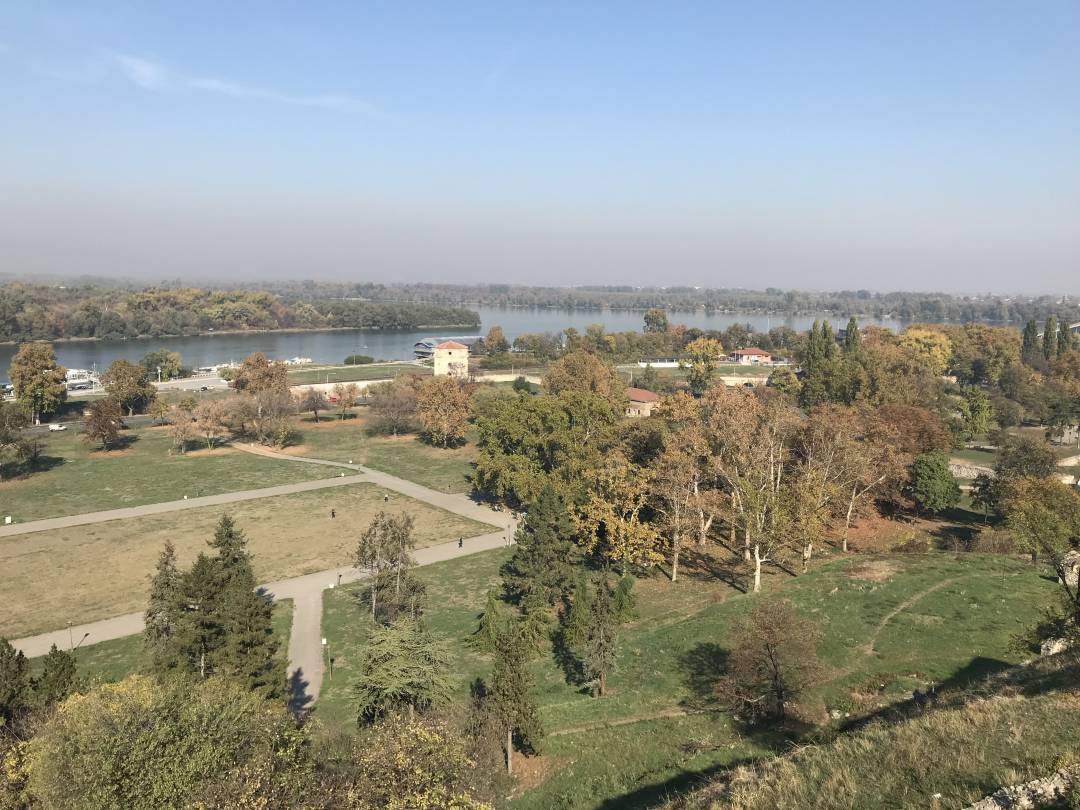 Confluence of Sava and Danube from the fortress

In one part of the fortress you will find Military museum. External exposition comprises various tanks, cannons, armored vehicles rockets, torpedos and many more. It’s accessible free of charge.  However, you have to buy ticket if you want to visit building of the museum where you can find weapons from various historical periods. So if you fancy these military stuff, go ahead and visit this museum 🙂 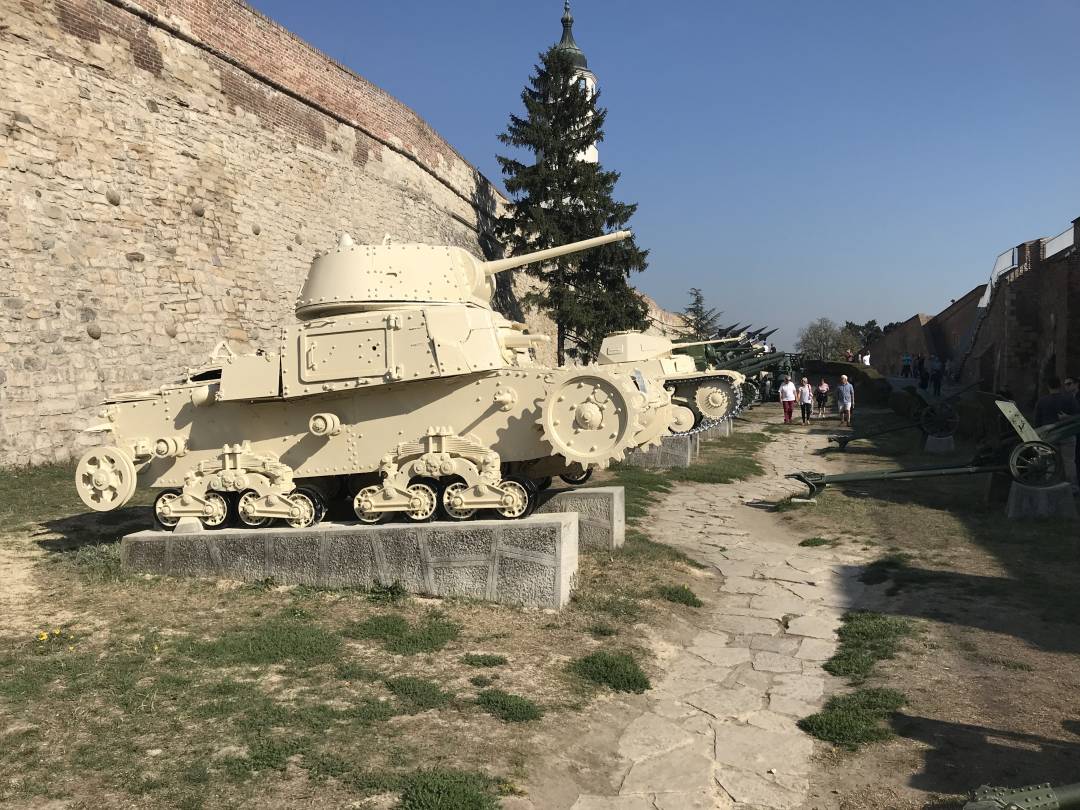 Exposition of the Military museum near fortification

Curved cobblestone street sometimes called the Montmartre of Belgrade. Skadarska street is one of the most visited and famous of all streets in Belgrade. This is bohemian part of the city where poor poets and writers used to meet in local inns. Nowadays, the street is lined with restaurants with terraces, cafés, pubs and bars. This street has unique atmosphere you will not find elsewhere in the city. Make sure you pay a visit 😉

Orthodox cathedral of Saint Marc in Belgrade locates in the Tašmajdan park. Cathedral is yet not finally built. Interior, particulary the ceiling is relatively simple, not covered with frescoes yet. Only in the vault above the altar there is huge painting. However, the ikonostas contains beautiful icons. Right after the entrance on the rights side of the cathedral massive marble tomb of king Stefan Dušan locates (he ruled the Serbian kingdom from 1331 to 1355). Other members of famous Obrenović dynasty are also buried here. 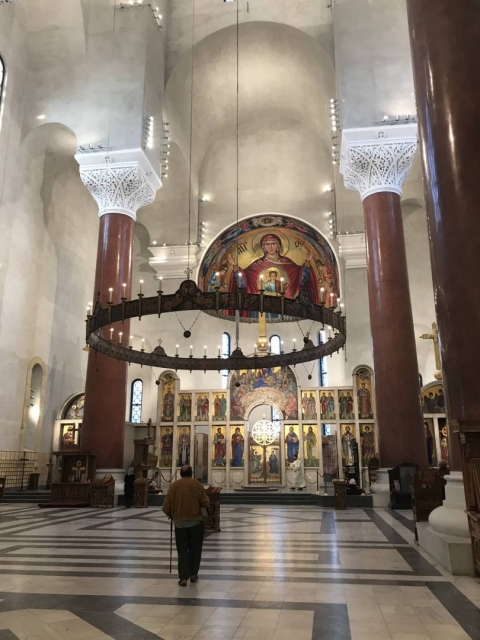 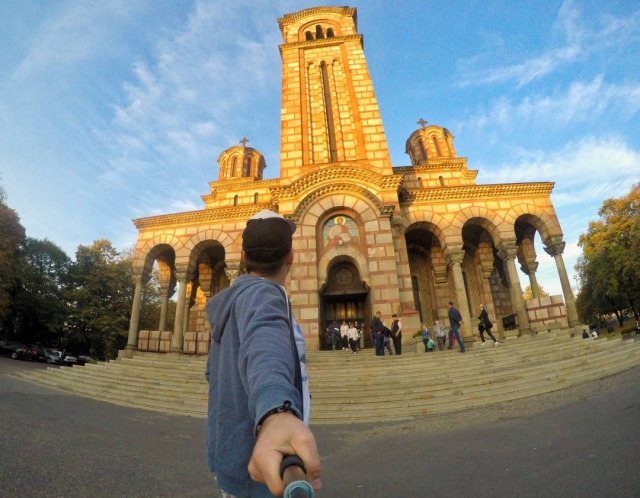 Cathedral of Saint Marc in Belgrade

The highest point of the dome of the Cathedral of Saint Marc reaches up to the 60 metres. Cathedral is not as old as it might seem. Built between 1931 and 1940 on the same place as original cathedral which was destroyed during WWI. 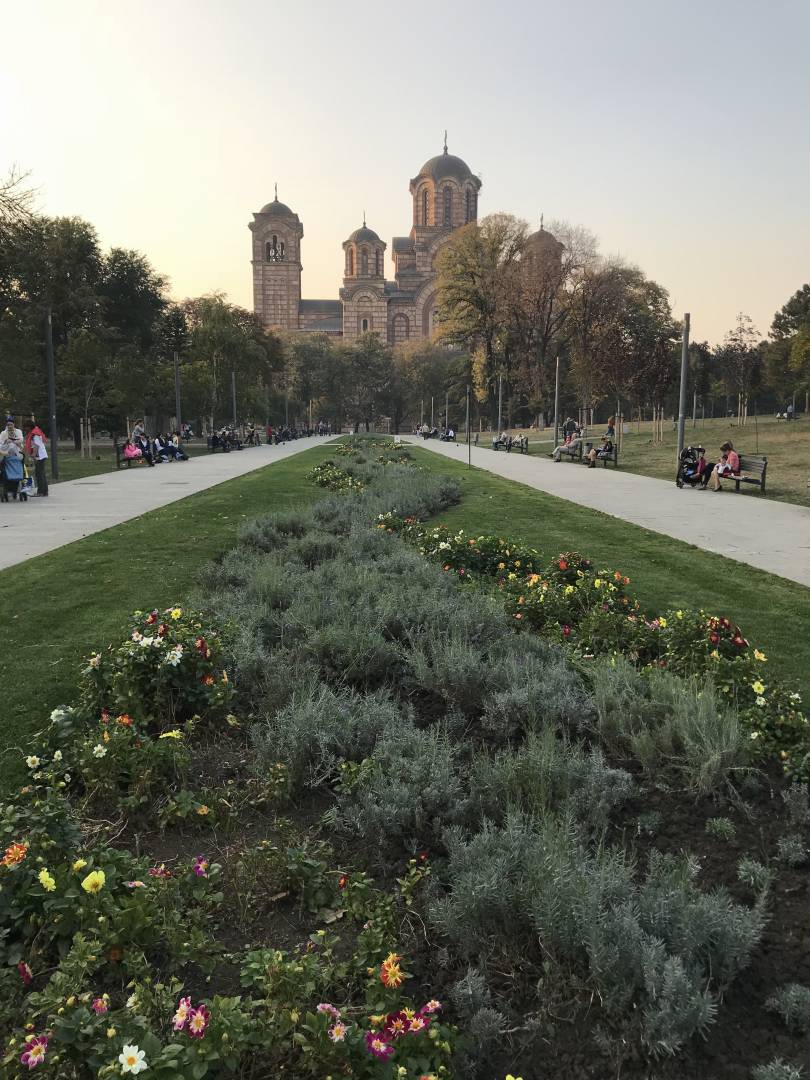 Tašmajdan park is very popular among locals and I figured out why. It’s vast, it’s green and it’s a place where you can avoid daily hustle. It was full of locals during the weekend. Families with children, elderly people and couples in love. People were strolling around the park or sitting on benches and talking. Some of them played chess, some of them where working out. Great time spent in the park 🙂 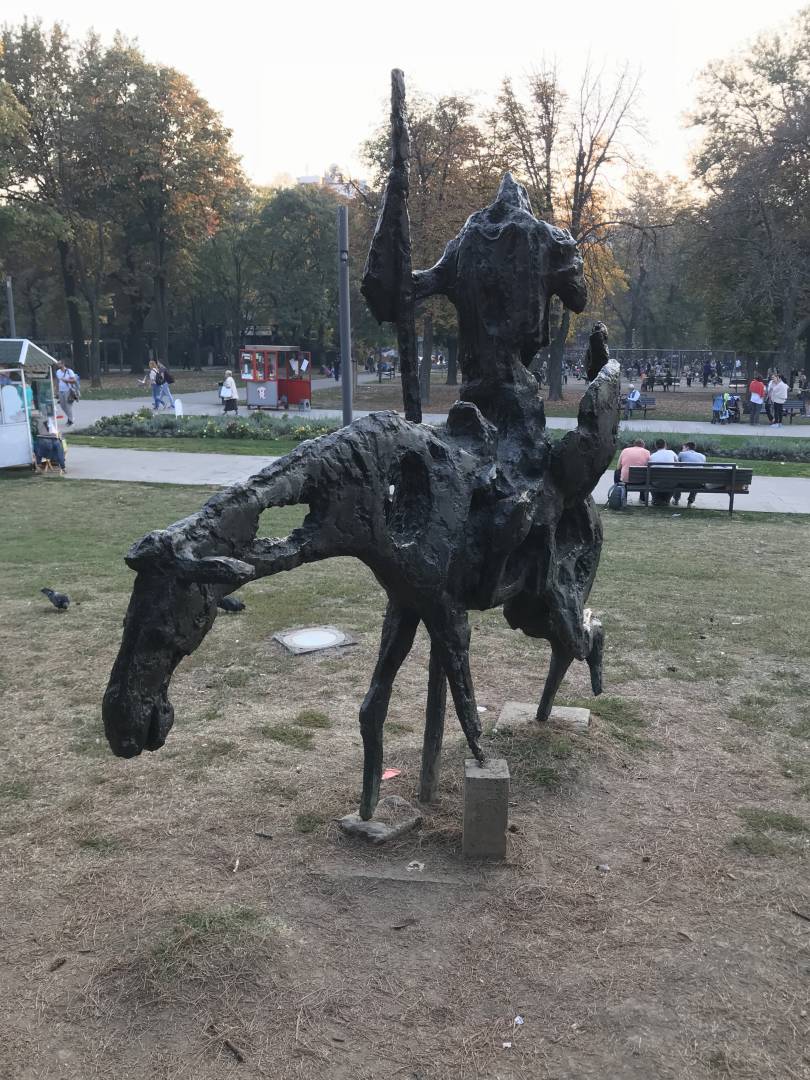 I found this statue in Tašmajdan park – is it Don Quijote de la Mancha?

As I was leaving Rajko Mitić stadium (CZ Belgrade) towards the city centre I had a wonderful view of perfectly lit Orthodox Cathedral of Saint Sava. This is the biggest Serbian Orthodox cathedral and possibly on the entire Balkan. The dome is 70 meters high. You can find the cathedral on the plateau in the quarter called Vračar. Yet this cathedral is not completely finished. Up to 10.000 worshipers can gather inside. 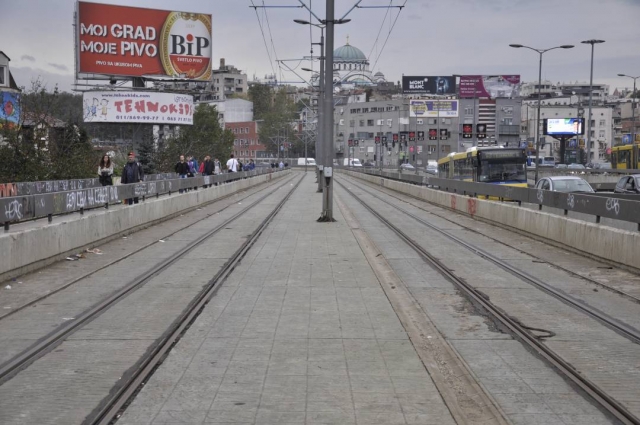 Cathedral of Saint Sava in the background, Belgrade

Knez Mihail street is probably the most famous street in entire Belgrade. This street really rocks. Go here right from Kalemegdan park. Knez Mihail is traffic free, as it is pedestrian zone. Here you will find many various cafés, restaurants with terraces, shops with souvenirs and other shops (fashion shops), money exchange, and so on. You should add Knez Mihail street in your list of places what to see in Belgrade 🙂 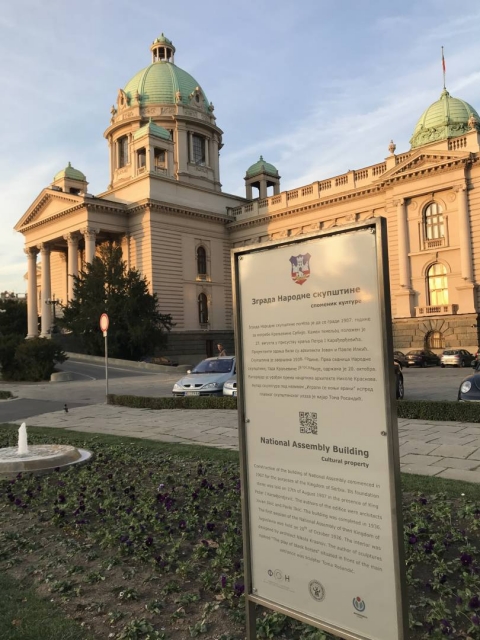 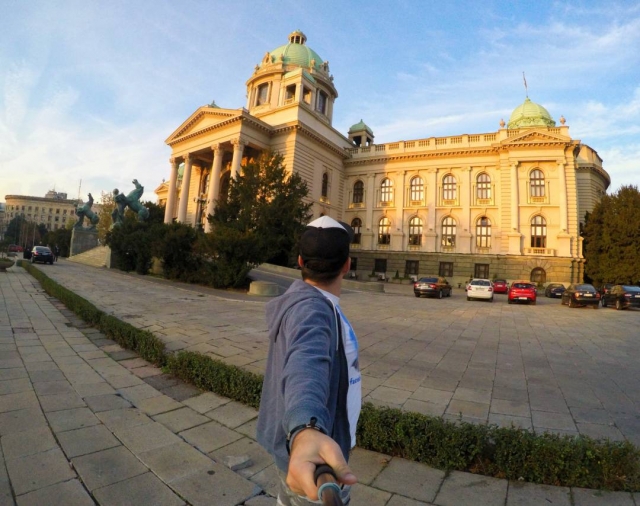 7. Other places what to see in Belgrade 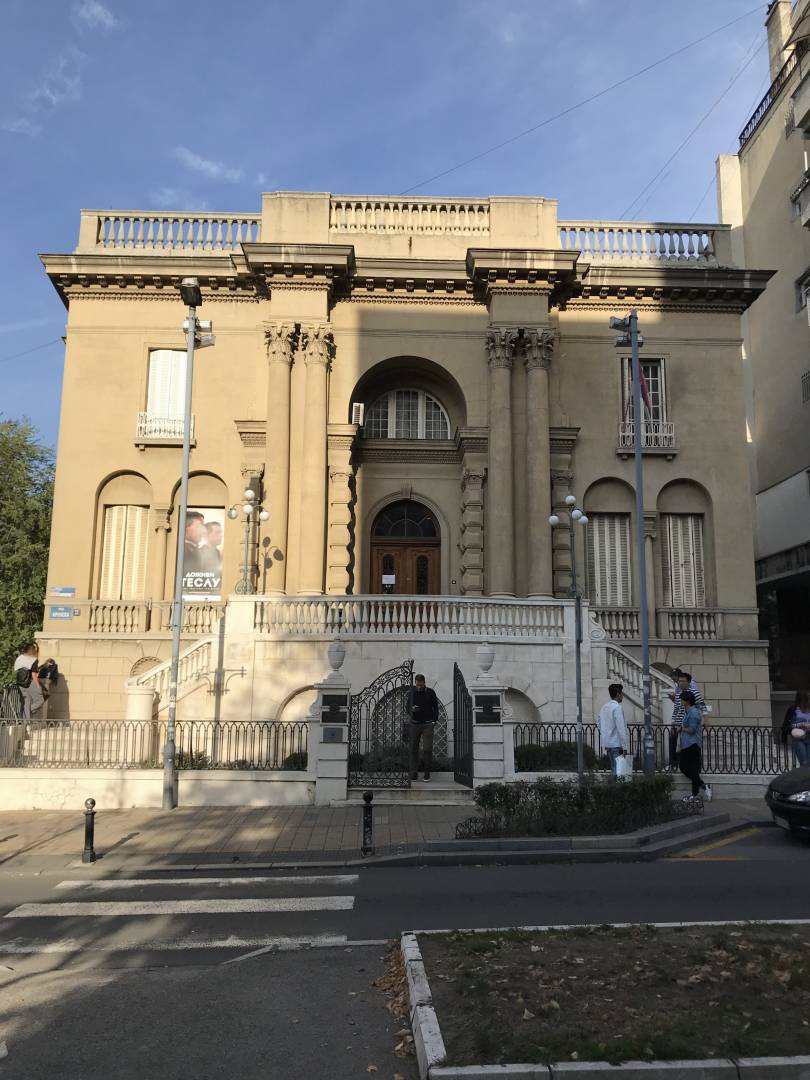 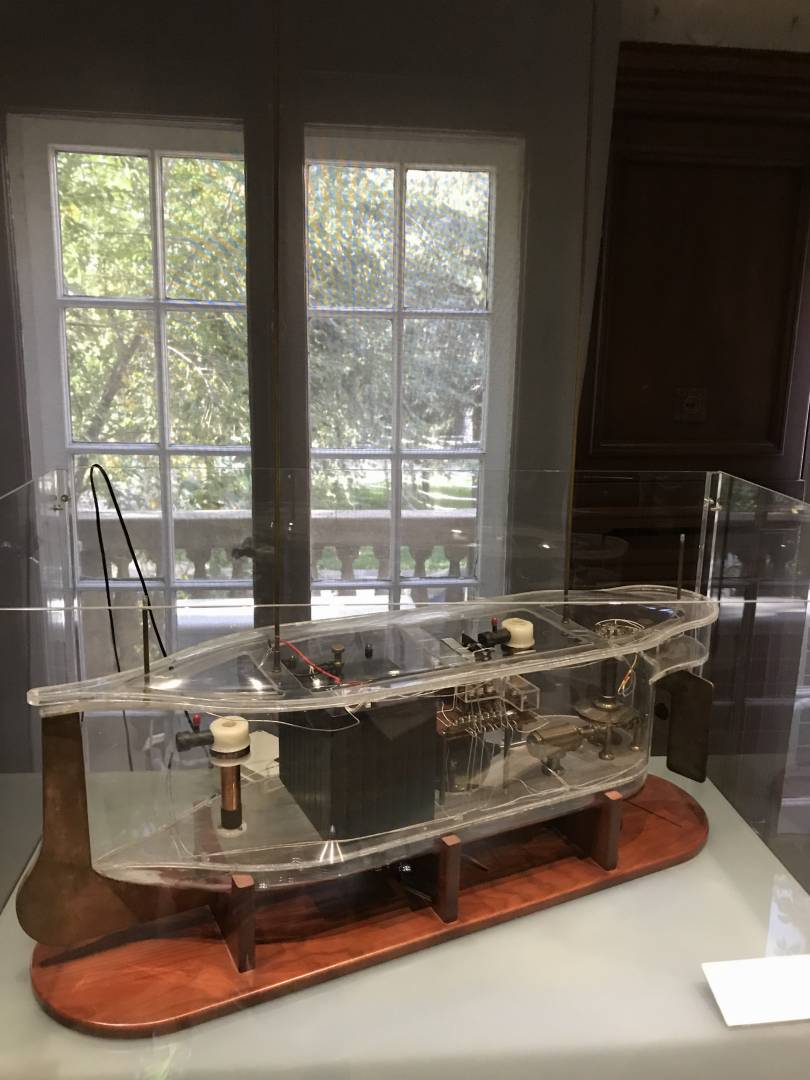 I visited Belgrade several times and each time I found something new in this city, something I didn’t notice before. Therefore I’ll be more than happy to return here again 🙂