Tokyo: 5 places you can visit in a day

Home/Tokyo: 5 places you can visit in a day
Previous Next

Tokyo: 5 places you can visit in a day

There are plenty of interesting places in Tokyo that are worth to visit. The distances between Tokyo’s attractions may be somewhat tricky. How can you choose places and not spend half a day in subway or train? Visit places that are on one subway line as we did 🙂

My day trip in Tokyo started with a visit of one of the youngest tourist attraction opened in 2012. The highest broadcasting tower in the world called Tokyo Skytree in the Sumida district, rising to the height of 634 meters. Observation decks are on two levels. The first one is at 350 metres above the ground and the second one at 450 meters. Be prepared for long queues of domestic and foreign tourists. 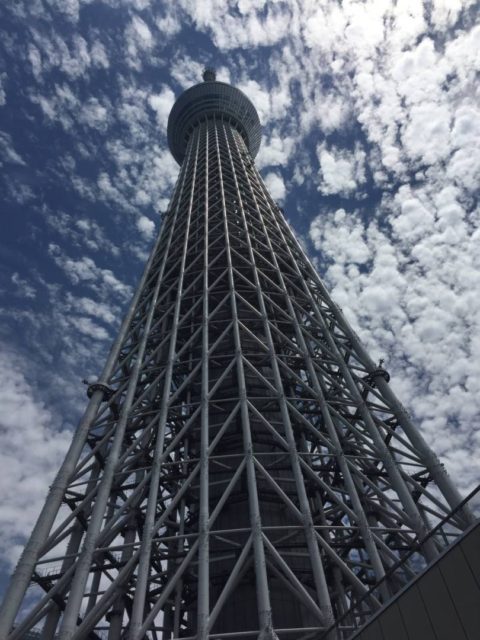 Fortunately I found special counter for foreign tourists. If you don’t want to wait 3 hours for tickets and then for lift, use it. Counter is marked as Fast Skytree Ticket Counter. You can buy fast tickets to the first observation deck at 350 meters. In 20 minutes I was in lift taking me to the heights. 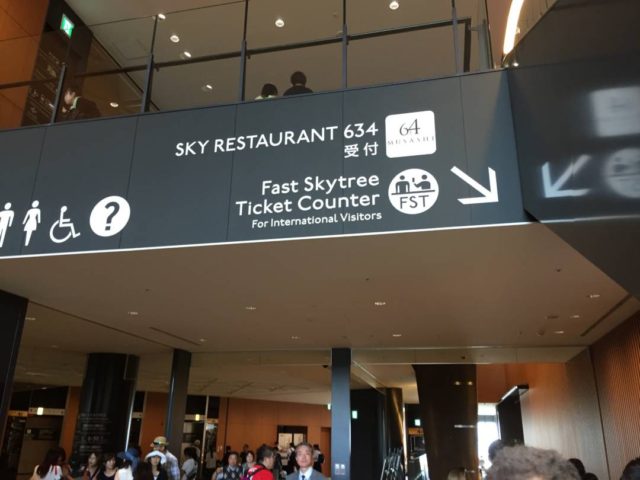 Here, you can buy fast lane tickets for foreigners

View from Tembo galleria at 450 meters

From 450 meters you have the best Tokyo views. Not evereyone buys a ticket to this height. Therefore Tokyo Skytree is less crowded on this level. When the weather conditions allows it, you can see as far as to Mt. Fuji which is more than 100 kilometers from here. I wasn’t that lucky 🙂 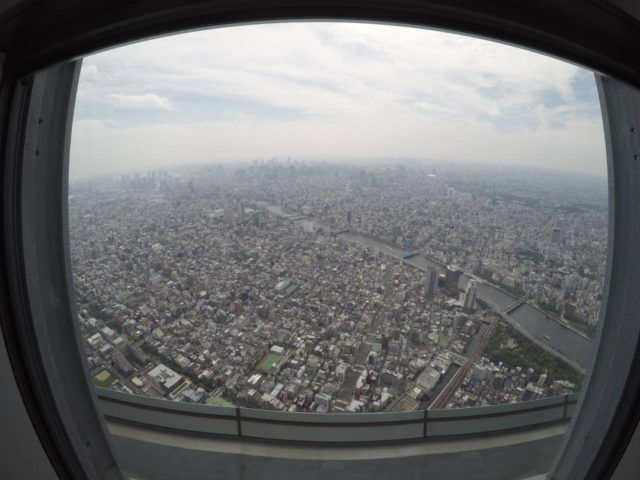 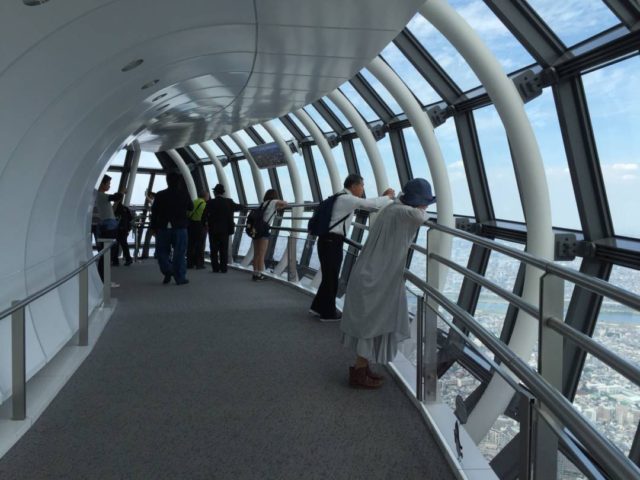 One of the first things you will notice from this perspective is that Tokyo is not so green. Yes, there are parks like big Ueno park. But from above you see buildings as far as you can see. Everywhere. 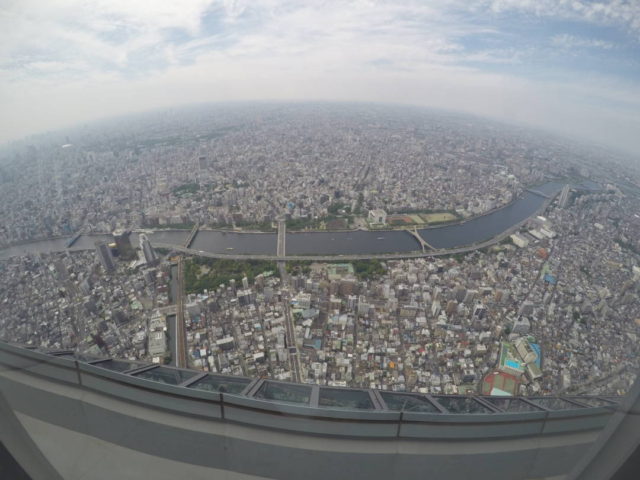 Everything is so small from this height 🙂

Below the Tokyo Skytree you will find various souvenir shops, cafés, restaurants and also acquarium. The largest shop is probable with television theme. Sweets, cards, toys, clothes, everything with japan TV characters. You should see this on your own 🙂

After terrific views from broadcasting tower I took a train across the bridge over Sumida river to historical district called Asakusa. Sensō-ji, is the oldest and most significant buddhist temple in Tokyo. The first temple built in this place already in 645.

From Asakusa subway station I waded my way through crowds and shops with various souvniers. Asakusa and Sensō-ji temple enjoys great popularity among tourists. Visit to the temple is free of charge. 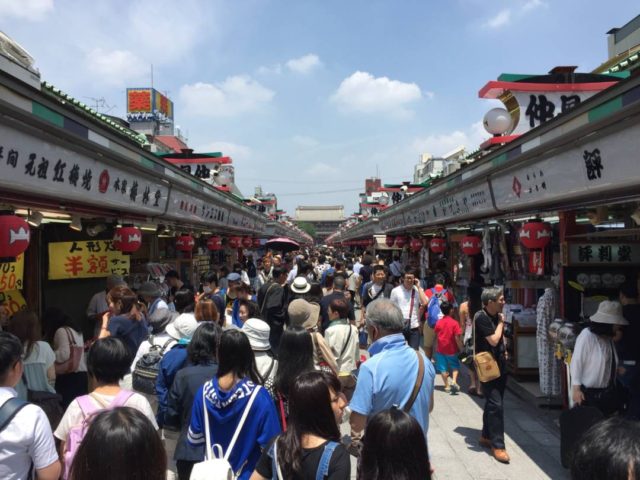 Through crowds to the temple 🙂 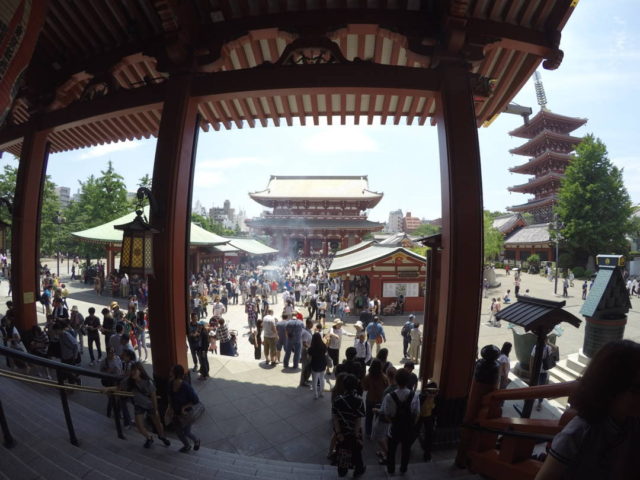 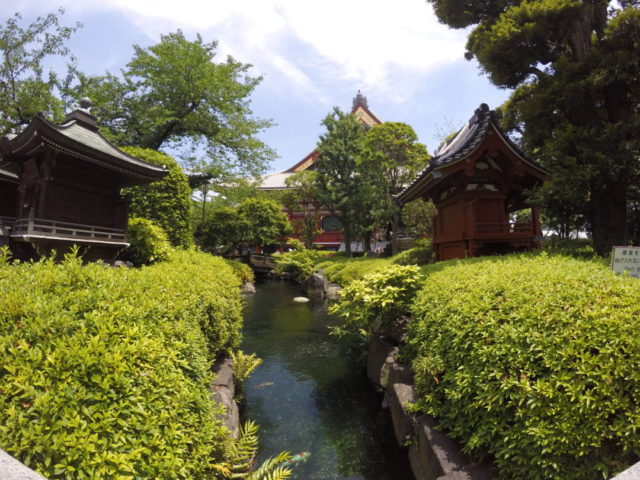 Japanese garden near the temple 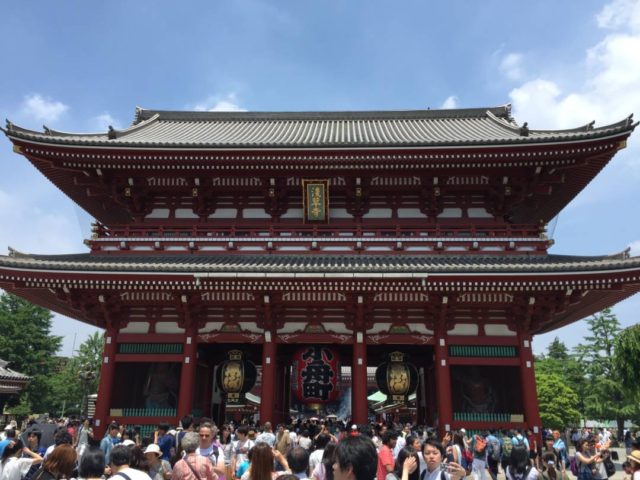 Gate to the temple 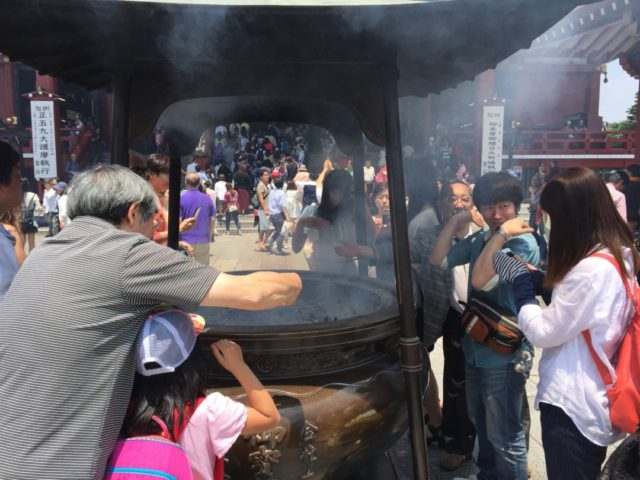 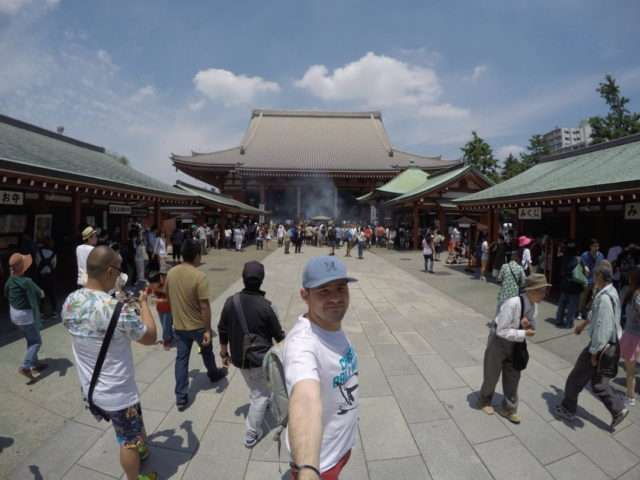 I took orange Ginza line to the next district. Akihabara, also known as Electric Town. Suehirocho stop is on the main street of the district. The traffic is on the part of the wide boulevard completely excluded. People walk the street everywhere. 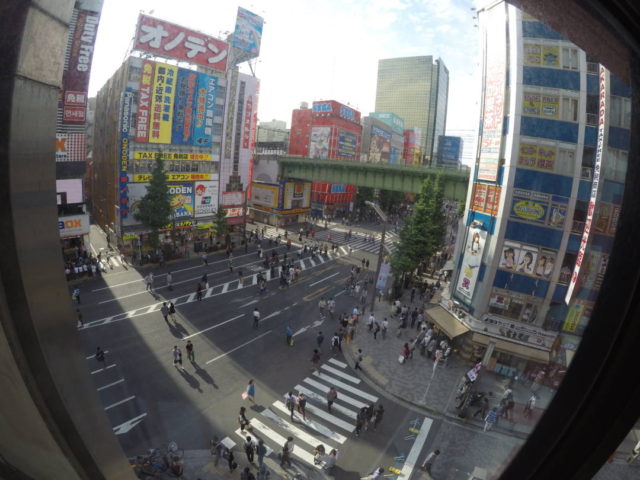 There are literally everywhere stores with electronics, hence the nickname Electric Town. Akihabara became centre of other typical japanese phenomenons – manga and anime. Manga doesn’t mean the fruit which might seem from the name 🙂 Manga are Japanese comics whose traditions goes back to the 19th century. Anime are those famous animated characters with typical wide eyes 🙂 You will find many stores  in Akihabara that sell anime and manga. 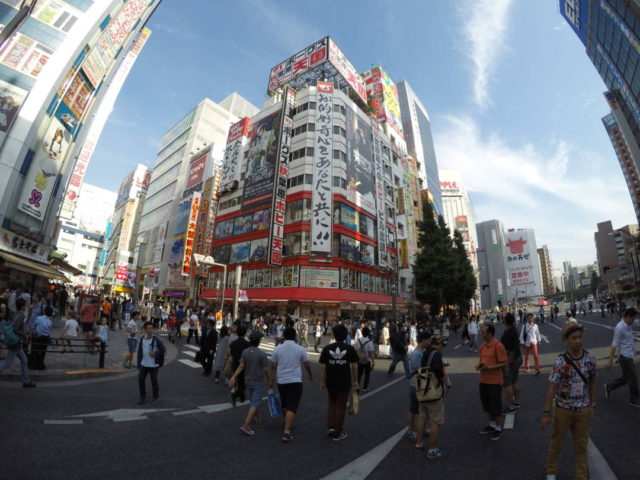 The street closed for cars on Sunday, Akihabara

Next stop on orange line for me was Ginza district. Ginza is something like Avenue des Champs-Élysées  in Paris or 5th Avenue in New York. Almost every luxurious fashion brand of the world has its store. Many of them has its own building. Architecture-lovers and shopaholics are in seventh heaven here. 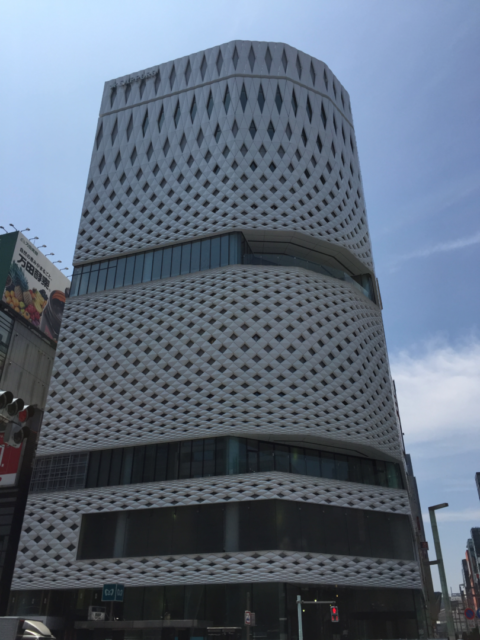 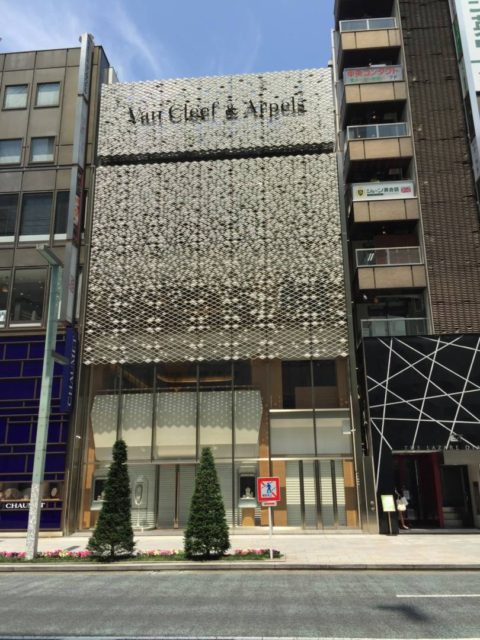 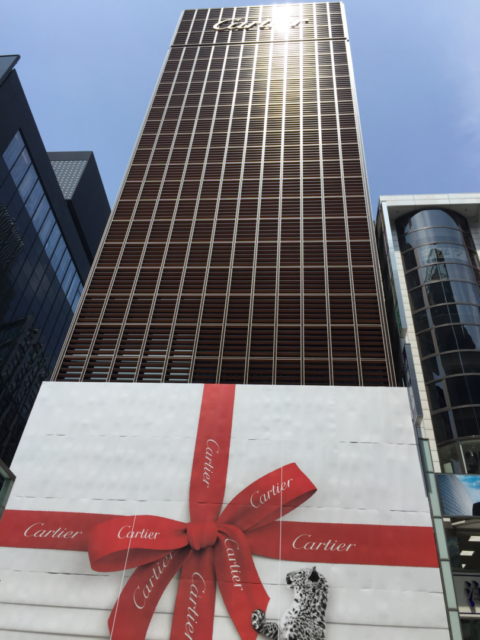 The last stop on may day trip around Tokyo was Shibuya, the end of orange – Ginza line.

Near the entrance to Shibuya station statue of dog Hachikō stands since 1934. Hachikō belonged to professor Ueno. Every day Hachikō came to the Shibuya station to wait its master returning from work. After death of its master loyal dog every day for 9 years 9 months and 15 days came here to wait the master who never returned. Statue was exposed during the life of Hachikō. Hachikō symbolises loyalty and faithfullness.

Pedestrian crossing in Shibuya, considered to be one of the most frequented in the world, is another place you should visit here. The best views on the crossing are from Starbucks Coffee.

Shibuya is a plae where you can eat well, shop well or play well in typical Japanese game room. And I don’t mean casino… If you want to bring funny souvenir from Tokyo I recommend you to visit shopping store called Tokyu Hands. 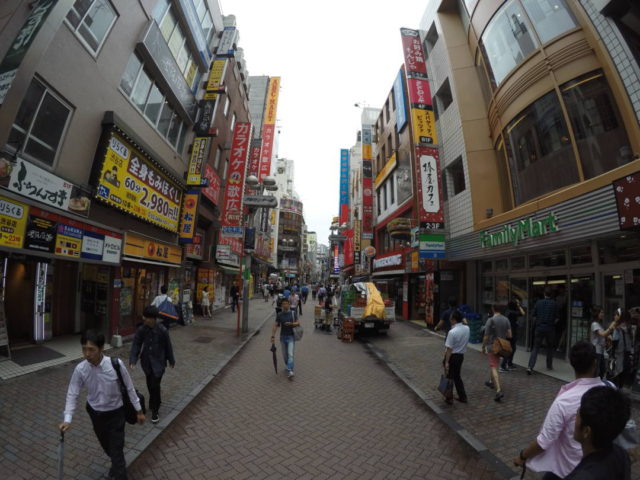 In the Shibuya district

Tokyo for sure offers much more than you can visit in a day. I chose simple plan with only one subway line so I could see sights and did not have to transfer several times. This is one way how to plan a visit of this incredible city 🙂