Rhodes city is the largest city of the island. It lies in the northeastern part of the island. We are going to show you sightseeings that are worth to visit. What food you should try. And which beach in the city you should visit. 🙂 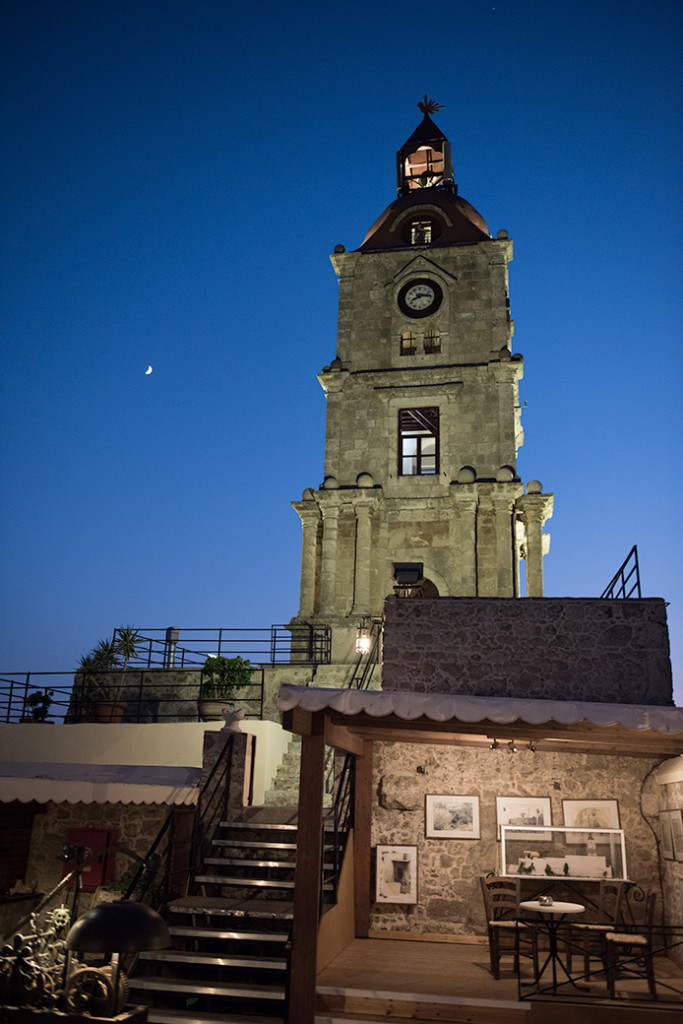 Experience awesome view on the whole medieval city of Rhodes from byzantine Roloi clock tower. Admission is 5 EUR. Coffee, beer or drink in the nearby bar is included in the price. 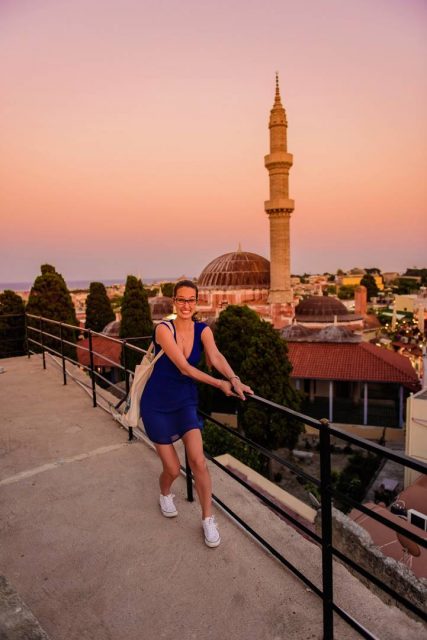 It was so windy on Roloi clock-tower. But the view was worth it. There is Suleiman mosque from Ottoman period. 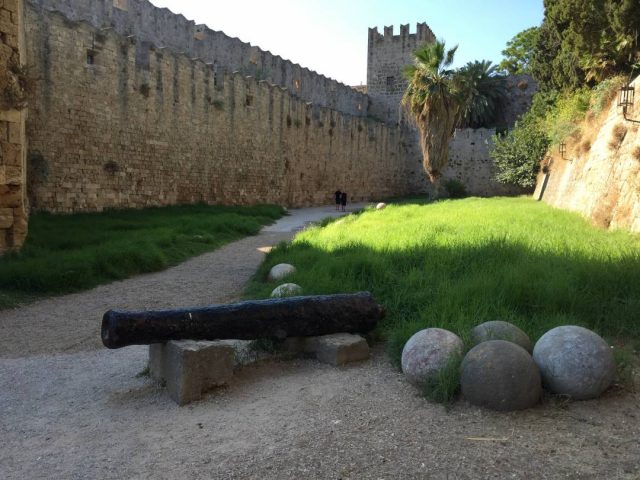 Historical city of Rhodes was designated as a UNESCO World Heritage Site. Take a short walk in the moat before the dinner 🙂 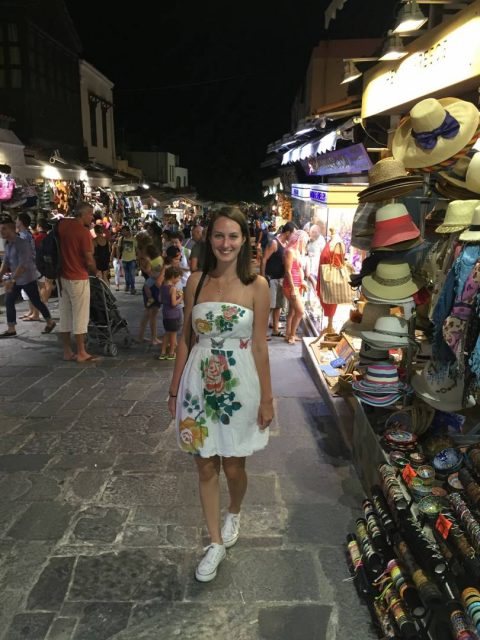 Sokratous street  is vibrant and main shopping street of the old town. You can buy here souvenirs. Many options to choose from. Quality greek cosmetics made of olives, magnets or typical greek slippers.. 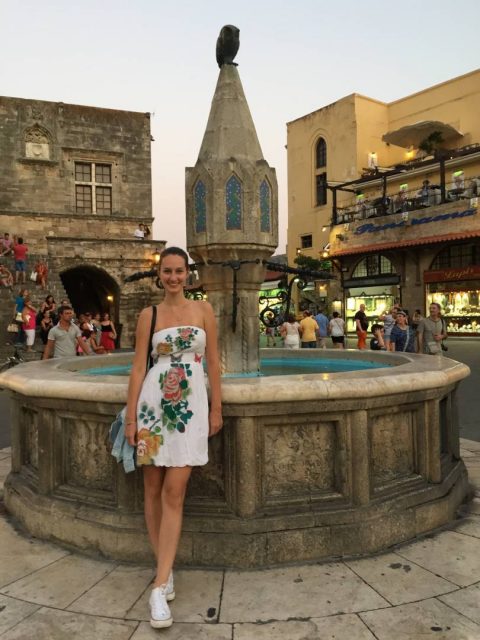 Sokratous street ends in a small square in the middle of which is functional fountain called Ippokratous. 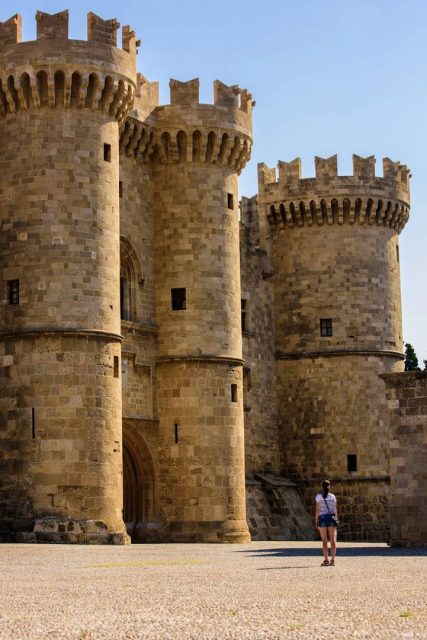 Palace of the Grand Master of the Knights of Rhodes is iconical building of the medieval city from Knights period. Foundations were built in 7th century. It was reconstructed to its present appearance in the first half of the 20th century when Rhodes belonged to Italy. 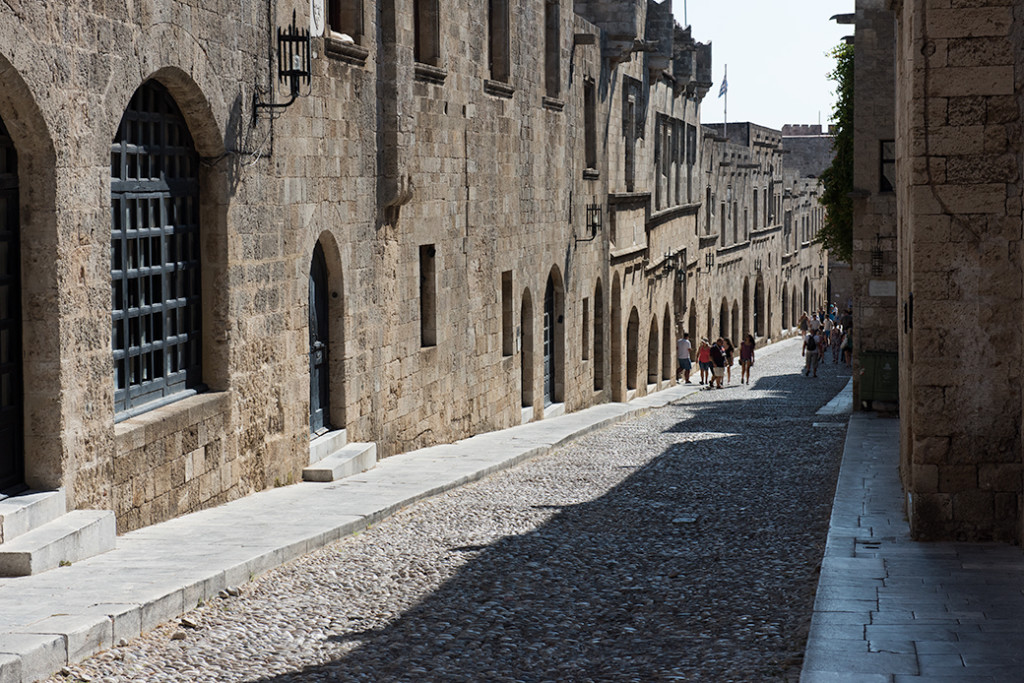 Street of knights lies next to the palace of the Grand Master. This street was also reconstructed to its present form during Italian period. 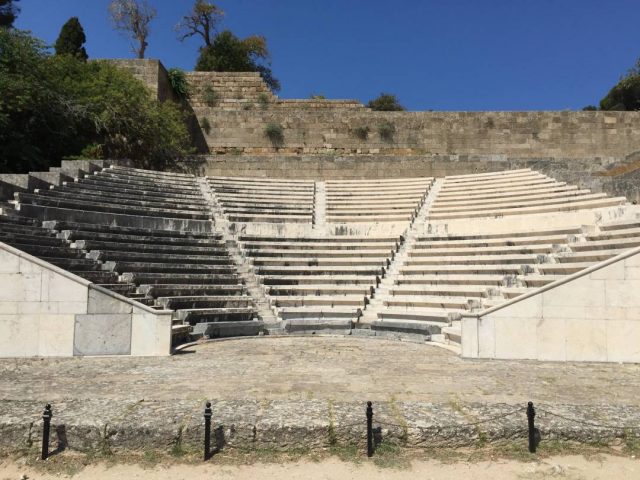 Ancient Acropolis above the city reminds the Classical period of the city. On this photo you can see reconstructed ancient amphitheatre. On the left side (which is not on the picture) there is a classical stadium which serves as a track for recreational runners. 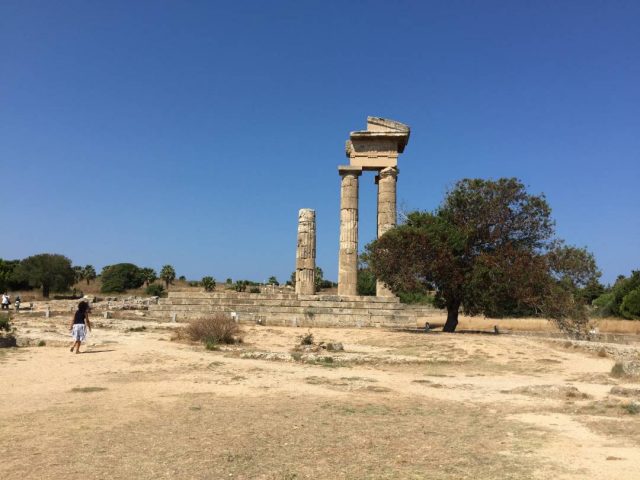 Acropolis is only 3 km from the city centre. Its history dates back to the 5th century B.C. Ruins on this photo belong to the Temple of Apollo. 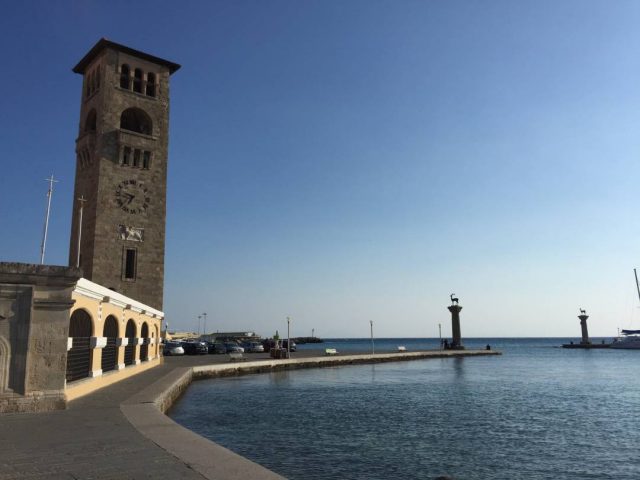 Mandraki harbour is one of the most favourite place for turist. There are two columns with bronze statues of deer and doe. On this place allegedly gigantic statue of Colossus of Rhodes (god of sun Helios) used to be erected. 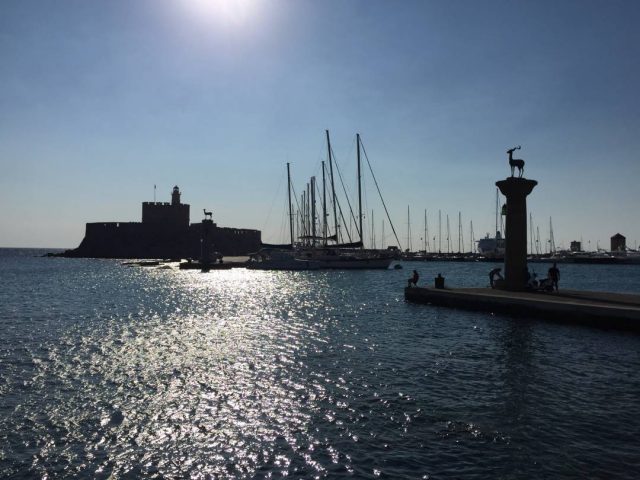 Mandraki harbour with statues of deer and doe. Rumour has it that the island of Rhodes was full of snakes and therefore people brought deers and does that helped the island to get rid of snakes. 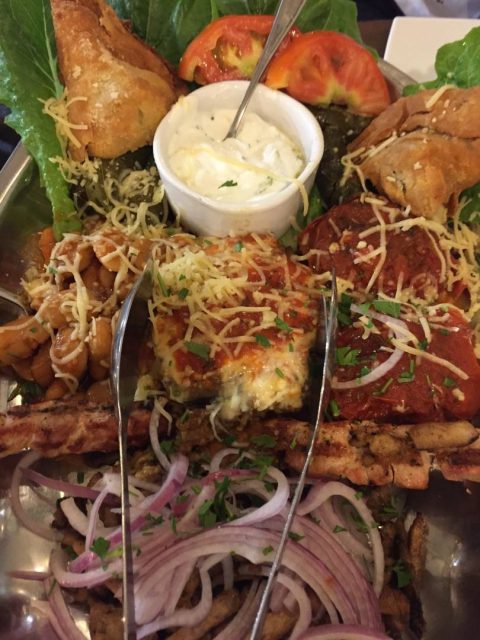 If you want to taste Greek cuisine we strongly recommend you to visit restaurant called Island Lipsi. This restaurant has long tradition as it was established in 70s of the last century. You will find it in Agisandrou street, parallel street with Sokratous street. On the photo – Greek table with specialities like souvlaki, gemista, stifado, mussaka and of course tzatziki 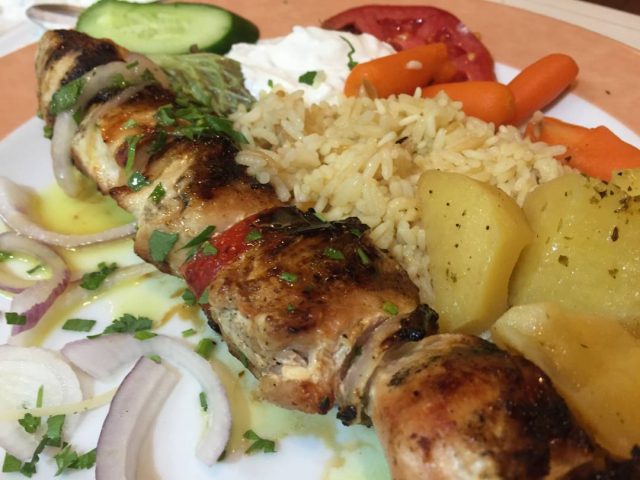 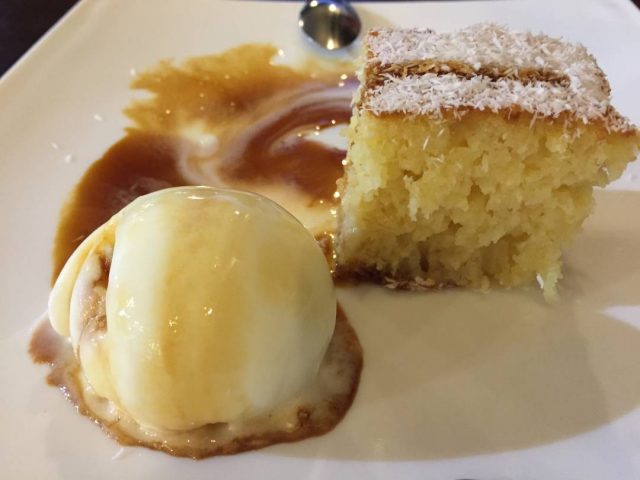 After meal Island Lipsi always gave us small dessert on the house. Delighted 🙂 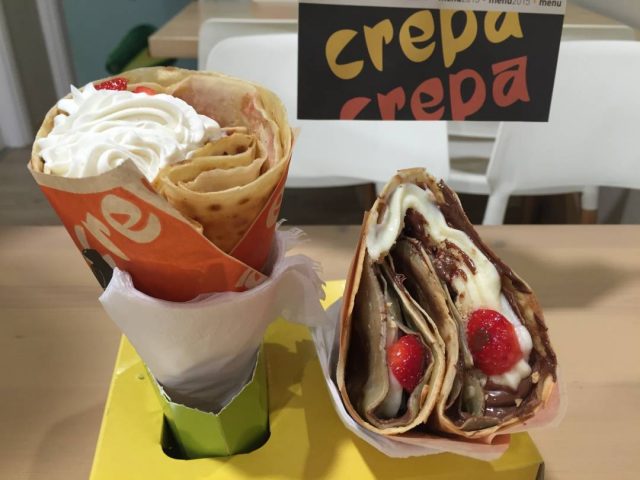 Lots of salt and sweet variations of pancakes offer Crepa Crepa. Only 5 minutes walk from the medieval walls. 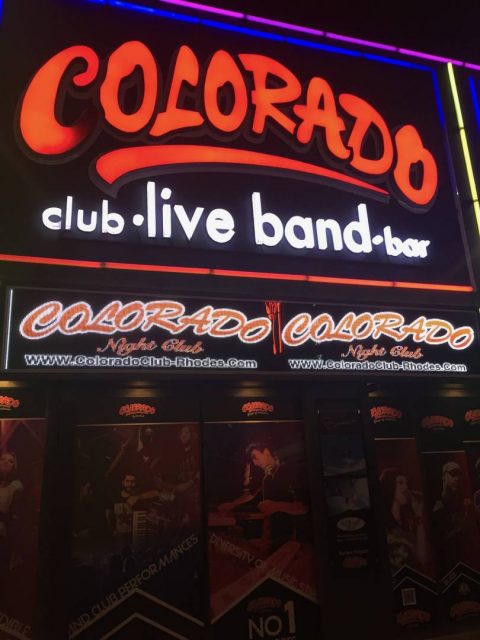 Nightlife with bars, pubs, clubs and discos concentrates in new town on the  Orfandeou street 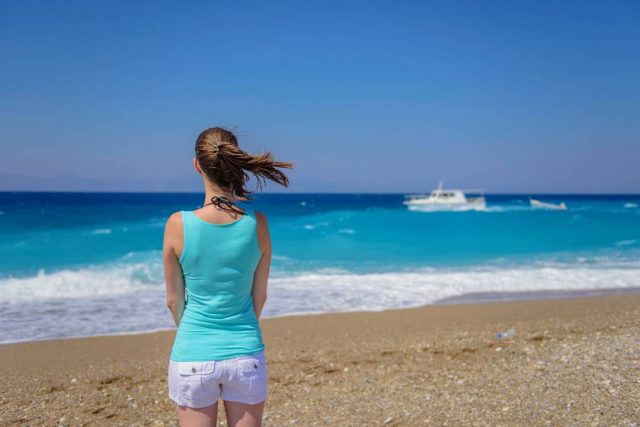 City lies on the of the island where two seas meet – stormy Aegean sea and mild Mediterranean. Most tourist concentrate on the beach called Elli beach on the side of the Mediterranean sea. Simply in Aegean sea it is hard to swim in big waves 🙂

Rhodes – where is what

Despite the fact that Rhodes city is not main aim of tourists, this city is definitely worth to visit. Tourists rather stay on the beaches which are in other parts of the island. But more about beaches of Rhodes in next blog 🙂