Home/Discover TOP of Europe – Jungfraujoch by train
Previous Next

From Lauterbrunnen to Kleine Scheidegg

The trip to Jungfraujoch was one of our traveller dreams. So we set off for a journey to Jungfraujoch from the direction of Lauterbrunnen via Wengen. It is possible also to in other direction via Grindelwald. On the train station in Lauterbrunnen we bought tickets to the TOP of the Europe – Jungraujoch. Ticket to Jungfraujoch is not at all a cheap thing. Full price from  Lauterbrunnen to the Jungfraujoch makes 183 CHF per person. As Swiss Travel Pass holders we had a 50% discount. Discount convinced us to go. And also we traditionally said to ourselves “since we are here….” 🙂

From Lauterbrunnen the cog railway set off to Wengen (1.274 m). Here we had around 5-minute break. People get off the wagon and made couple of shots of beautiful alpine panorama. 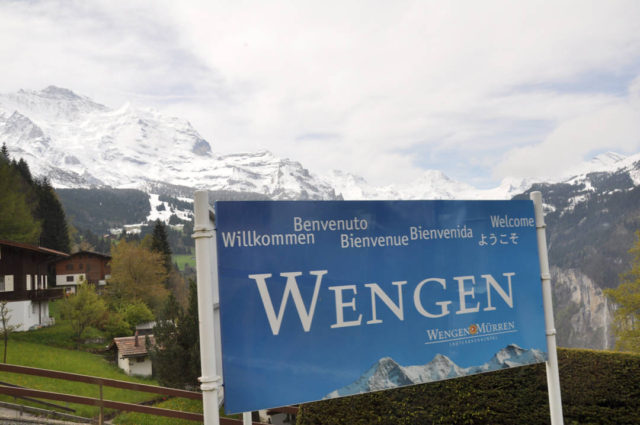 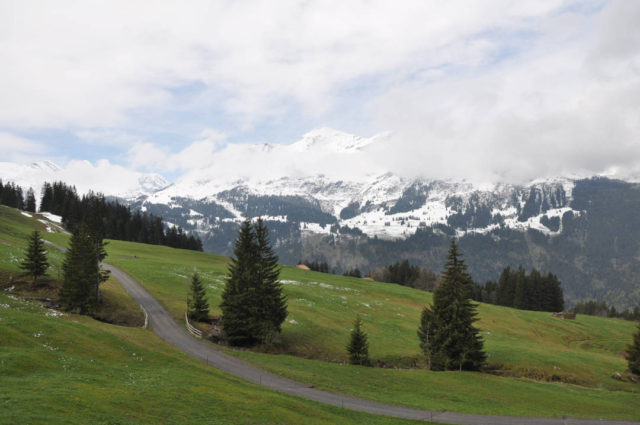 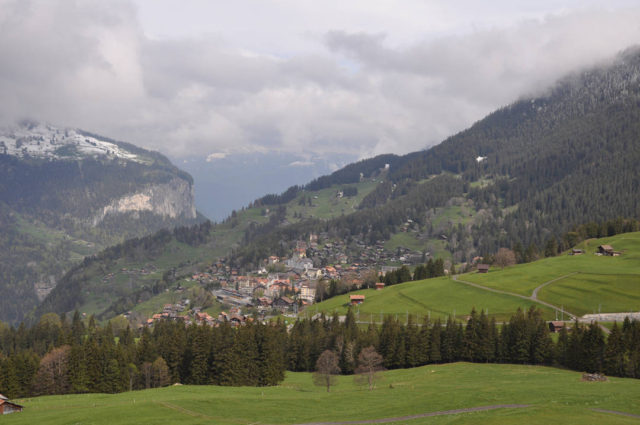 The cog railway continued its journey towards Kleine Scheidegg (2.061 m). Above Wengen green meadows  gradually started to change into vast snowy areas. In may, there is still lot of snow at this altitude. Few daredevils traveled in the wagon with us who went to Jungfraujoch “lightly”. One even with sandals with socks 🙂 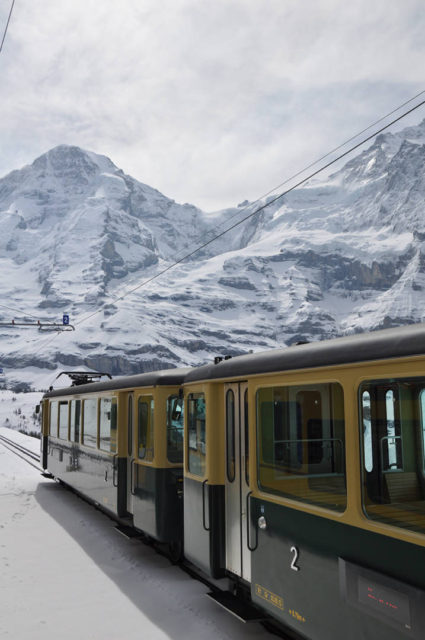 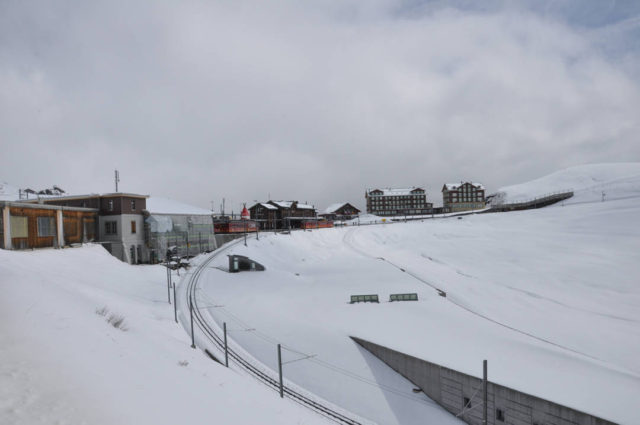 From Kleine Scheidegg to Jungfraujoch

In Kleine Scheidegg we changed to Jungfraujochbahn. This cog railway will take you to  Jungfraujoch in 50 minutes. Unfortunately our cogwheel broke down after two minutes of ride. We got stuck for 20 minutes in between two stops. This was the only moment during our stay in Switzerland that something was not working. Finally, the cog wheel returned to the Kleine Scheidegg station. A new cogwheel was then prepared and as a compensation we received a voucher for drink or meal at the top. We could continue in our journey. Stunning views on the famous north wall of Eiger opened in front of us. Huge glaciers that had to be several hundred meters thick blindingly shined in the light of the sun.

With increasing altitude we considerably started to feel that air is less dense. It was harder to breathe and from time to time dizziness occurred. After arrival at the final station, we took few minutes to acclimate to the altitude of 3.454 m. 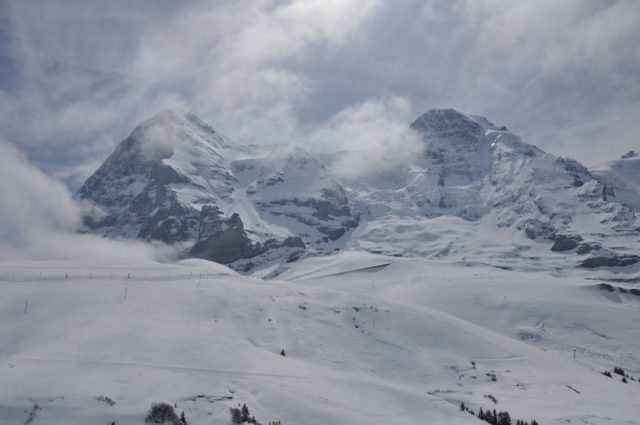 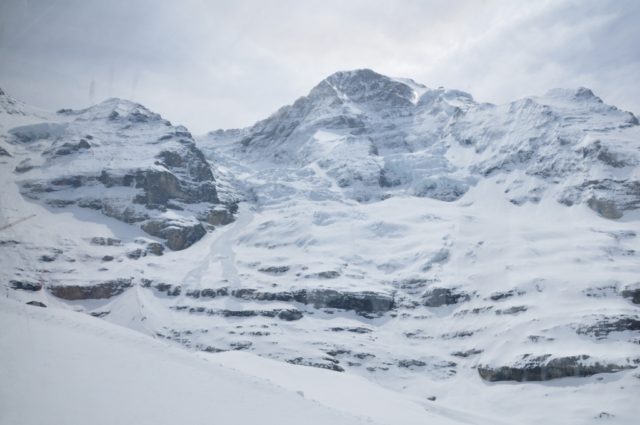 Jungfraujochbahn is cog railway, engineering masterpiece proposed by Adolf Guyer-Zeller. Workers started to built this railway in 1896. It took 16 years to finished it. The track is delving into massive of Eiger after several minutes of ride from Kleine Scheidegg station. The end station is in  Jungfraujoch.

Our first steps from Jungfraujoch station led to the Ice palace (Eispalast). 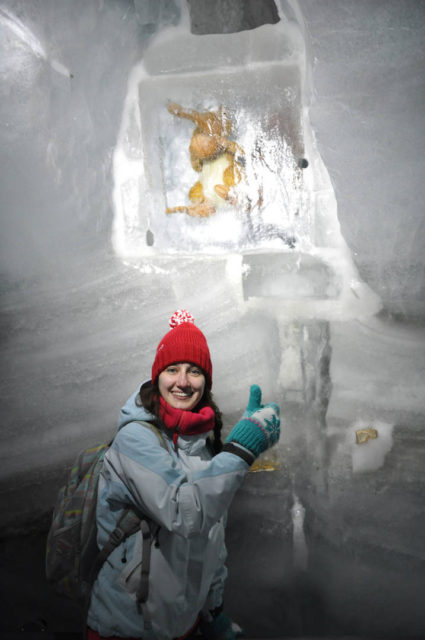 In the ice palace with frozen Scrat from Ice Age movie, Jungfraujoch 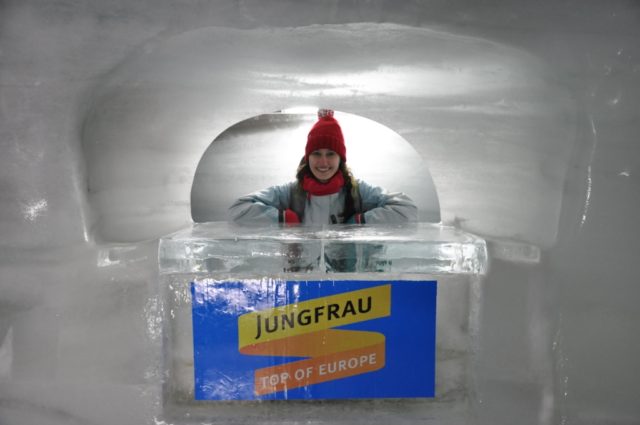 It was freezing cold in the ice palace. If you want to go here, make sure you take warm clothes with you. 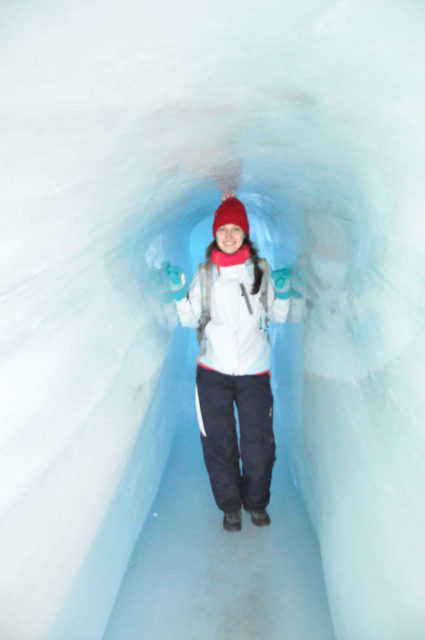 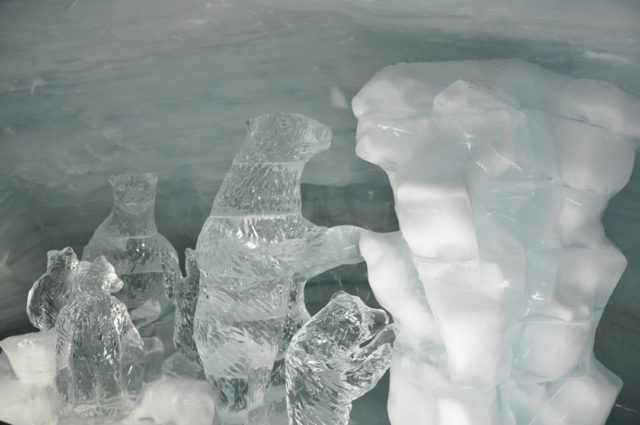 Exhibition of ice statues in the Ice palace 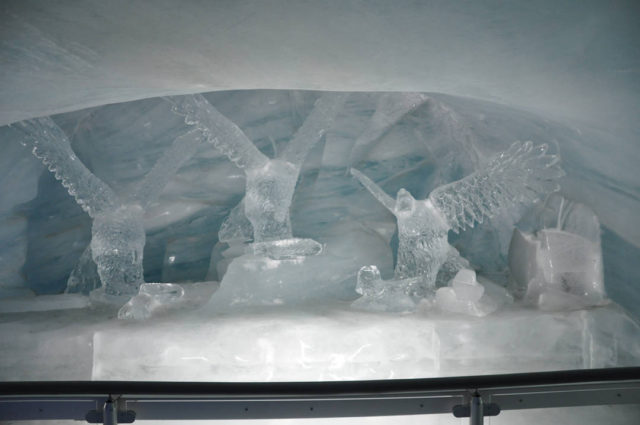 Statues made of ice

After the Ice palace we decided to go to the outer snow plateau. On the one hand we had Jungfrau mountain (4.158m) and on the other Mönch mountain (4.107m). We walked a little bit further and huge space appeared in front of us with Aletsch glacier (Aletschgletscher). Visibility was not very good because it was cloudy. When the visibility is good it is said that you can see as far as to Black wood (Schwarzwald) in Germany. From the main building there is an elevator that can take you to the Sphinx observatory. It is one of the highest situated observatory in the world. 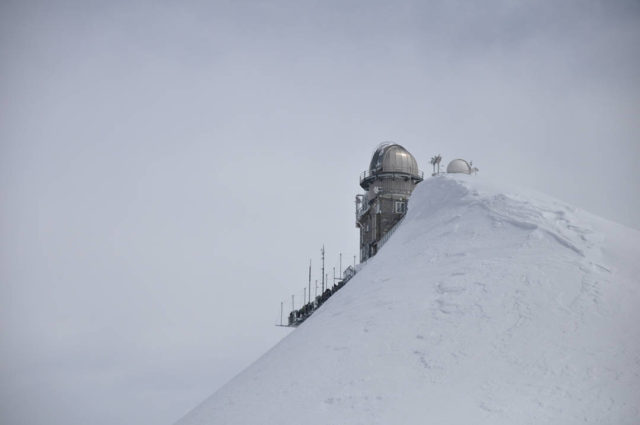 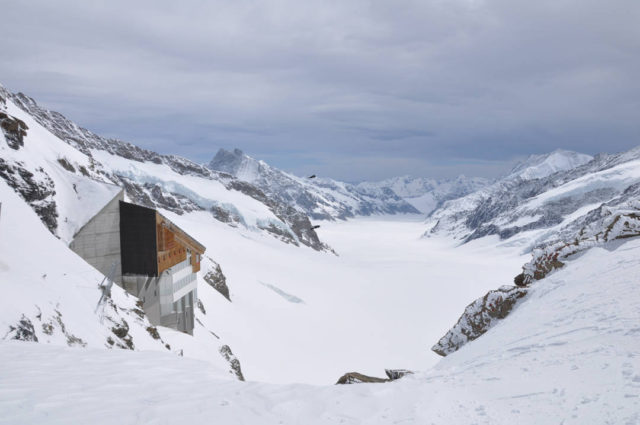 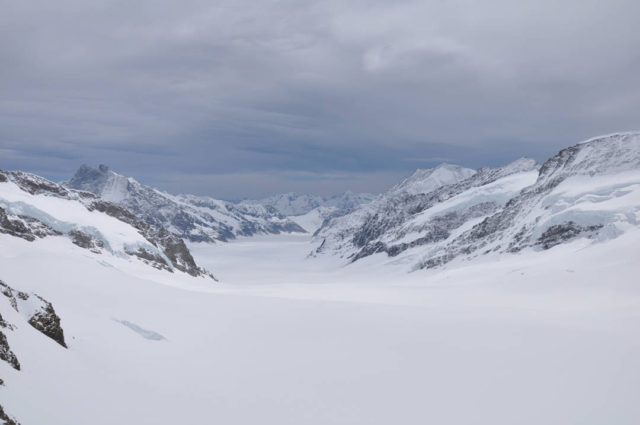 Aletsch glacier is the largest Alpine glacier and the largest valley glacier in the continental Europe. It is 22 km long and covers area of 84 squared kilometres. 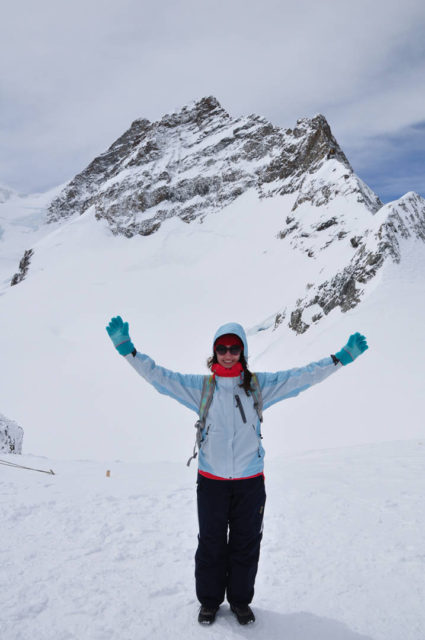 Below the Jungfrau mountain 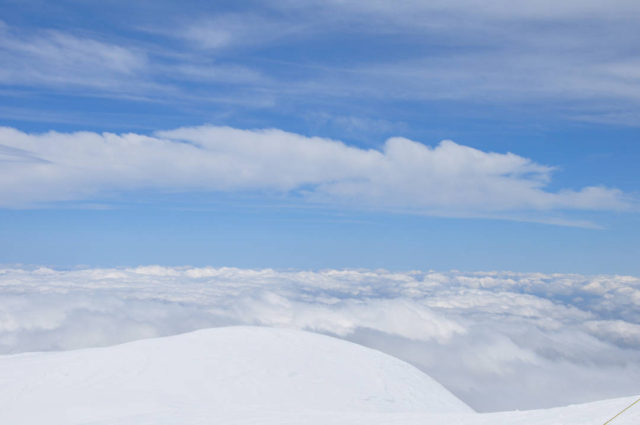 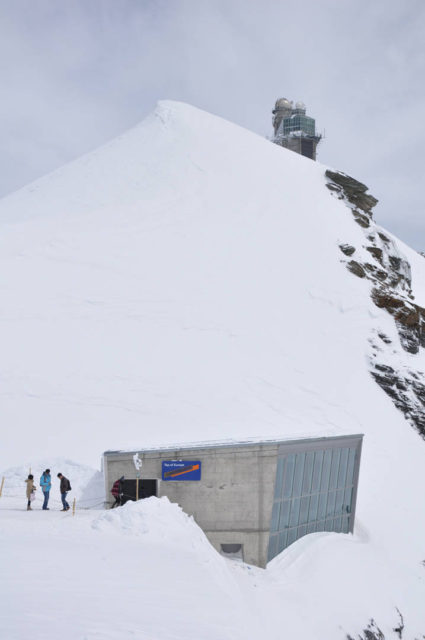 A piece of India above the clouds

There are several restaurants and souvernir shops on the top of Europe. There is also one Indian restaurant called Bollywood. Tourists from India make a large percentage of total tourists. Nowhere on our travels around Europe we have met so many tourists from India as we did here in the Jungfraujoch mountain 🙂 We did not know why this mountain is so popular among these tourists until we got home. We found out that lot of Bollywood movies were filmed in this area. And we must confirm that they chose excellent location for their movies as this part of Switzerland is really very very beautiful.

The Swiss also named one of the cogwheel train after Indian director – Yash Chopra. Such honor is given only to one other man – Adolf Gyuer-Zeller!

Our visit to Jungfraujoch was unforgettable experience  🙂