When you hear about the city of Seoul you imagine ultramodern city of 3rd millenium. However, not everybody knows that there are many historical preserved sightseeings in this city despite the turbulent history of this country. These sights remember times long past. On the third day of our stay in Seoul we decided to get to explore the historic city center 🙂

Perfectly organized underground of Seoul gets us to our station – Gwnaghwamun. We walk the stairs of exit number 9 of the underground purple line number 5. With each following step emerges the Gwanghwamun square. In the center of the square majestic bronze statue of sitting Sejong the Great (1397-1450), the 4th king of  Joseon dynasty. 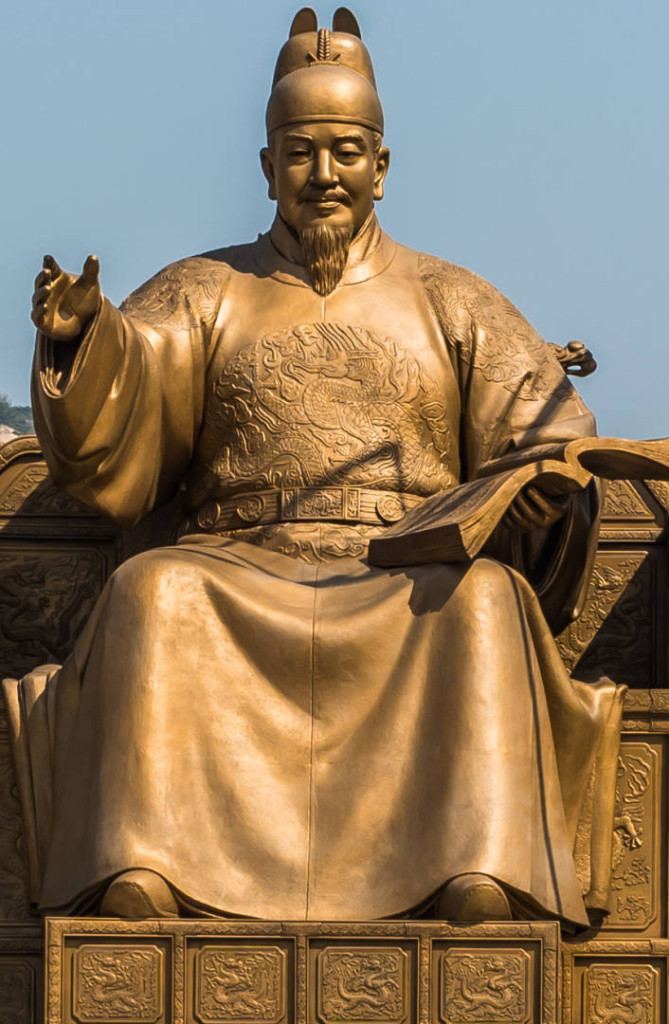 The greatest contribution of King Sejong the Great is considered the creation of korean alphabet Hangul which is used in Korea until now. 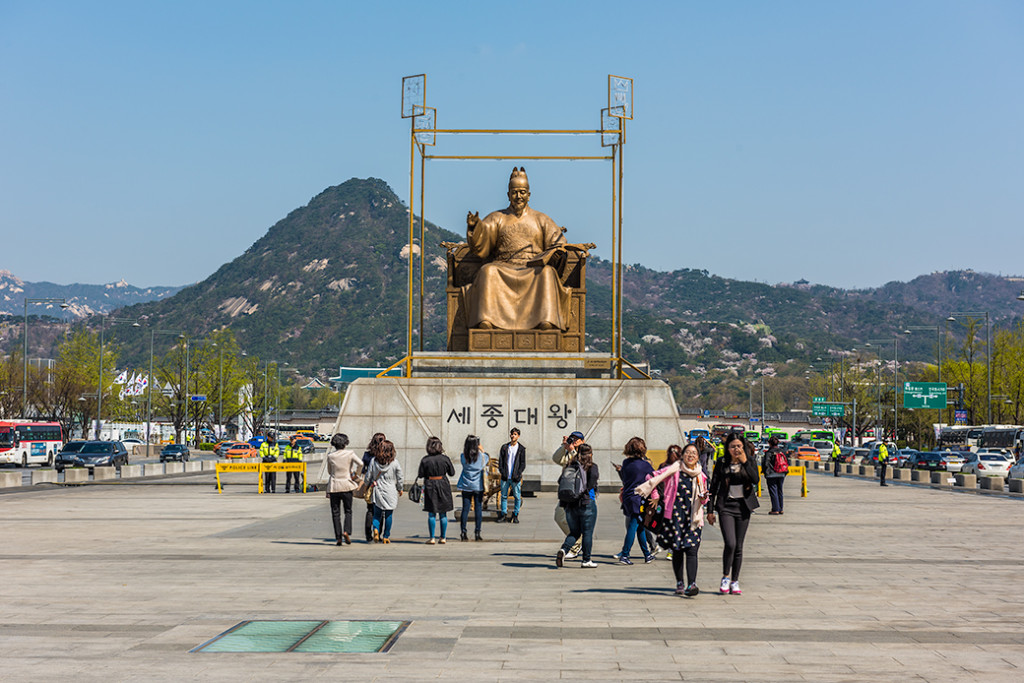 Gwanghwamun square with the statue of Sejong the Great, Seoul, South Korea

At the opening of the renovated Gwanghwamun square on 1st of April 2009, 224.537 flowers were used as decoration. Each flower symbolized one day during the Seoul was the capital from the 28th October 1397 to the 1st April 2009.

Behind the statue of Sejong the Great carefully kept lawn winds as a green ribbon. Even from the distance we can see the main gate to the Gyeongbokgung palace, according to which the square itself is named.  Gwanghwamun gate. 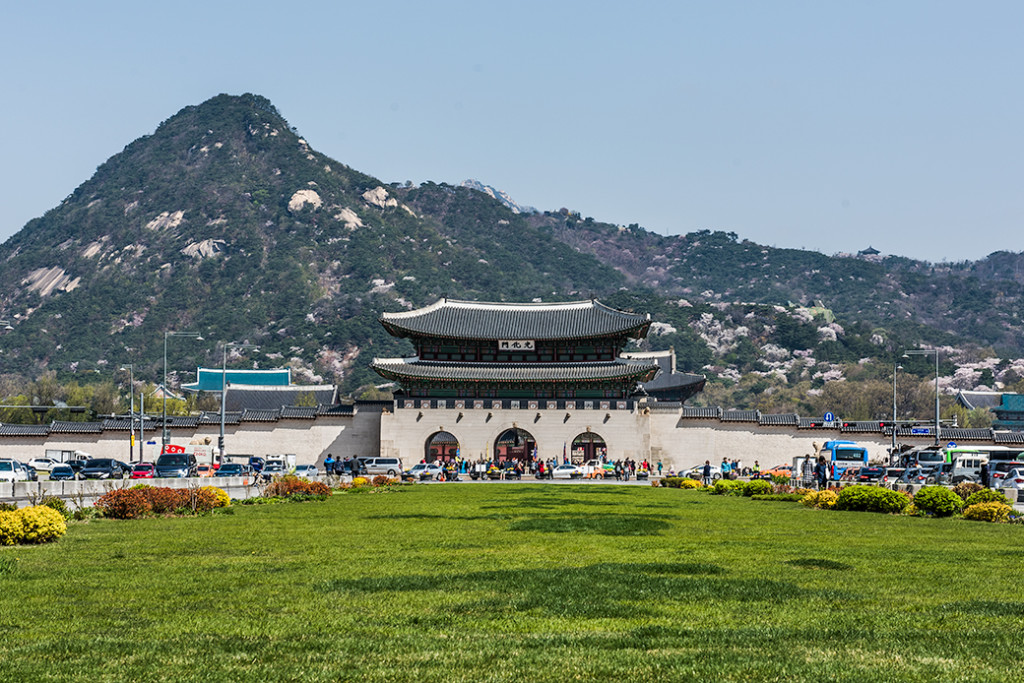 Gwanghwamun was built in 1395. Throughout its existence it experienced ups and downs. Reconstructed to its current appearance was in 2010. 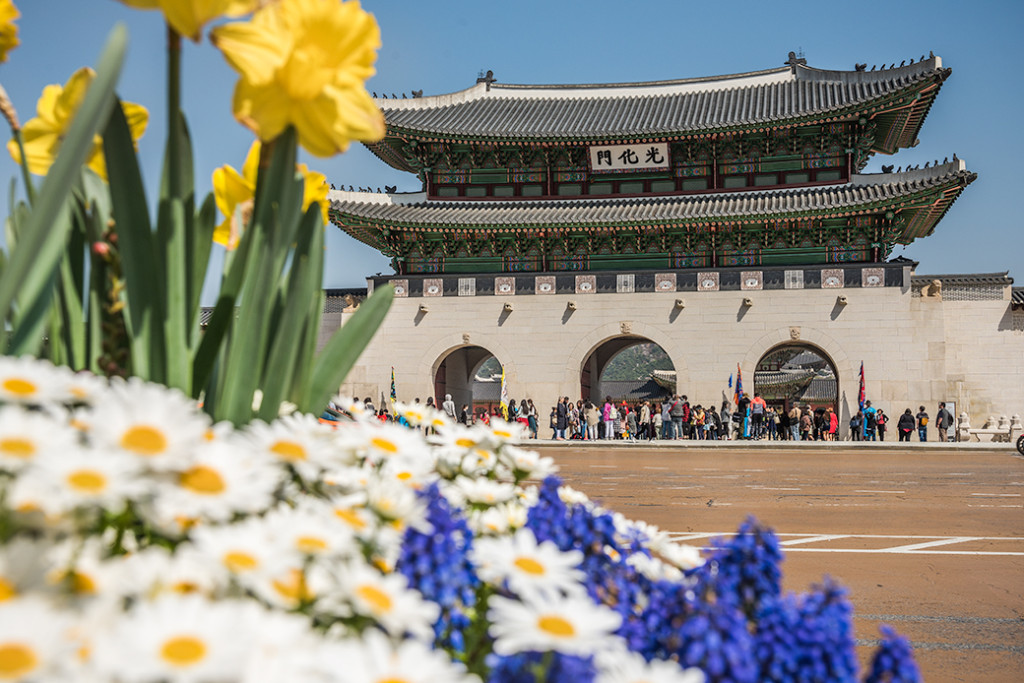 There are guards in front of Gwanghwamun gate. We are lucky. At 11am, there is a changing of guards. We are waiting couple of minutes to see this known ceremony. 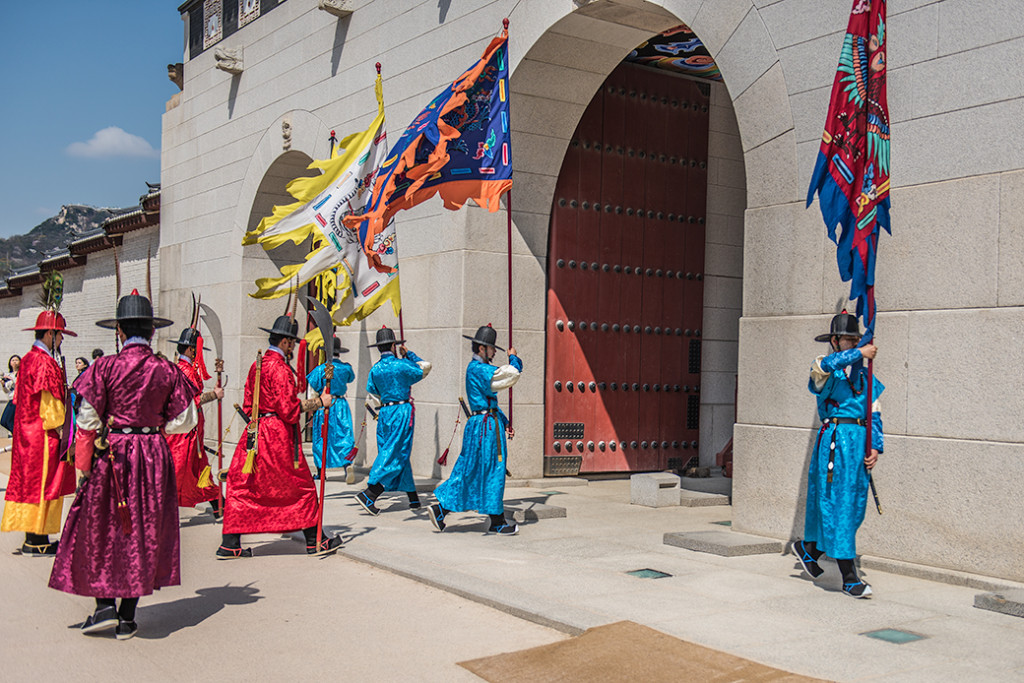 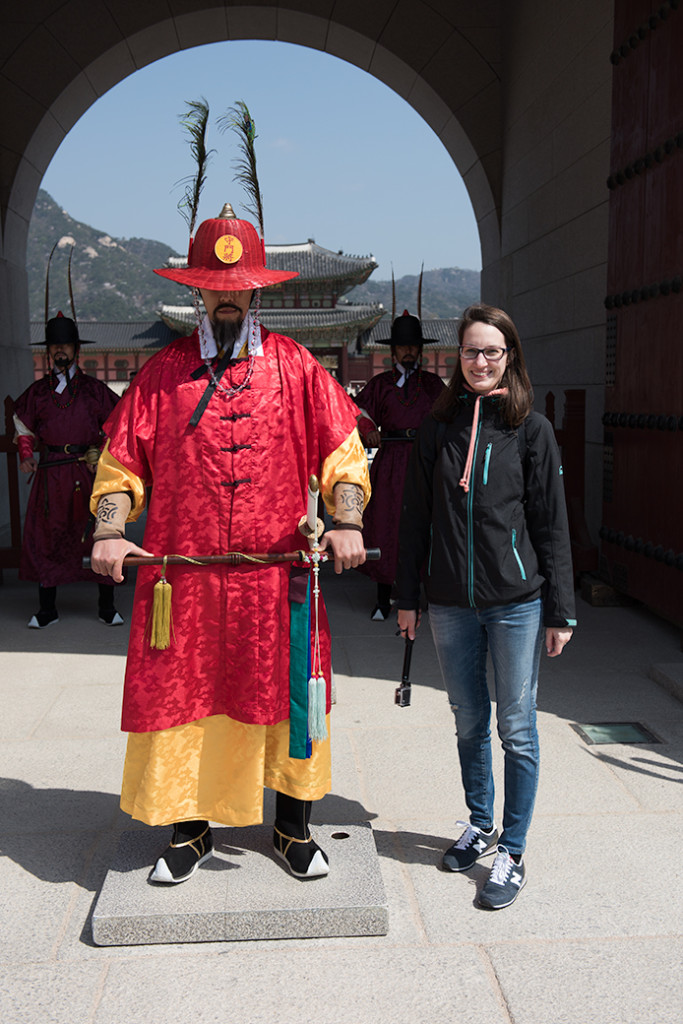 The gem of Seoul – Gyeongbokgung palace

After passing through the gate portal we are entering huge courtyard. On our right side, we can see ticket office. We buy combo ticket to 4 main palaces(Gyeongbokgung, Changdeokgung, Changgyeonggung and Deoksugung) and to Jongmyoshrine for 10 000 KRW (approx. 8 EUR/ticket). Trust us, it is very good price for what you get 🙂 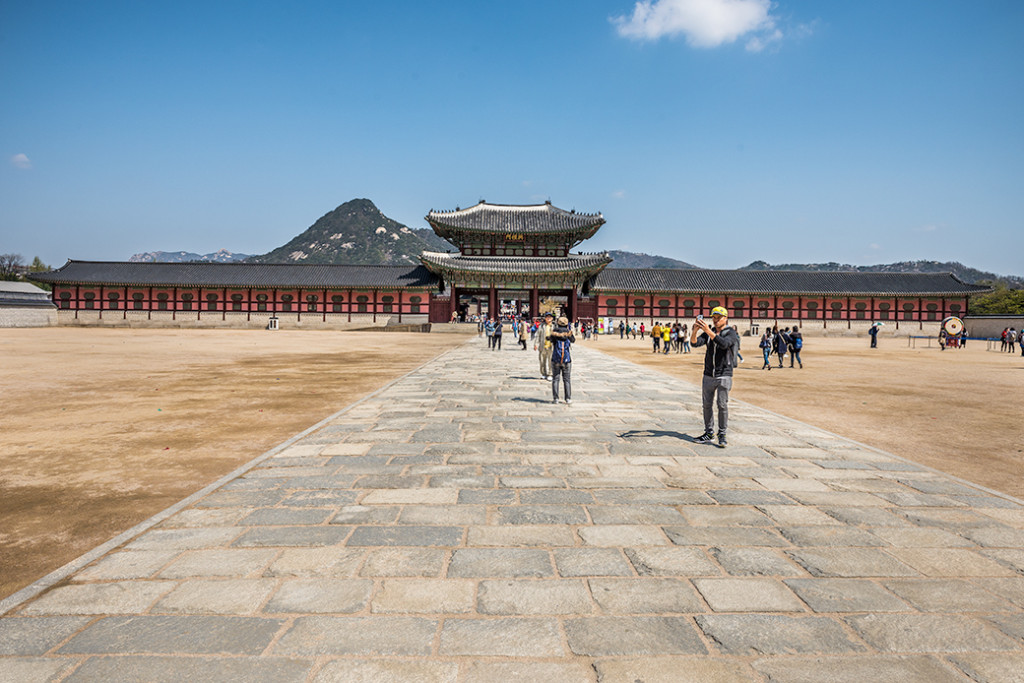 Through another gate called Heungnyemun we are entering another vast courtyard. In the middle of the courtyard in front of us is the Gyeongbokgung palace. Gyeongbokgung used to be the main royal palace of the Joseon dynasty built in 1395. 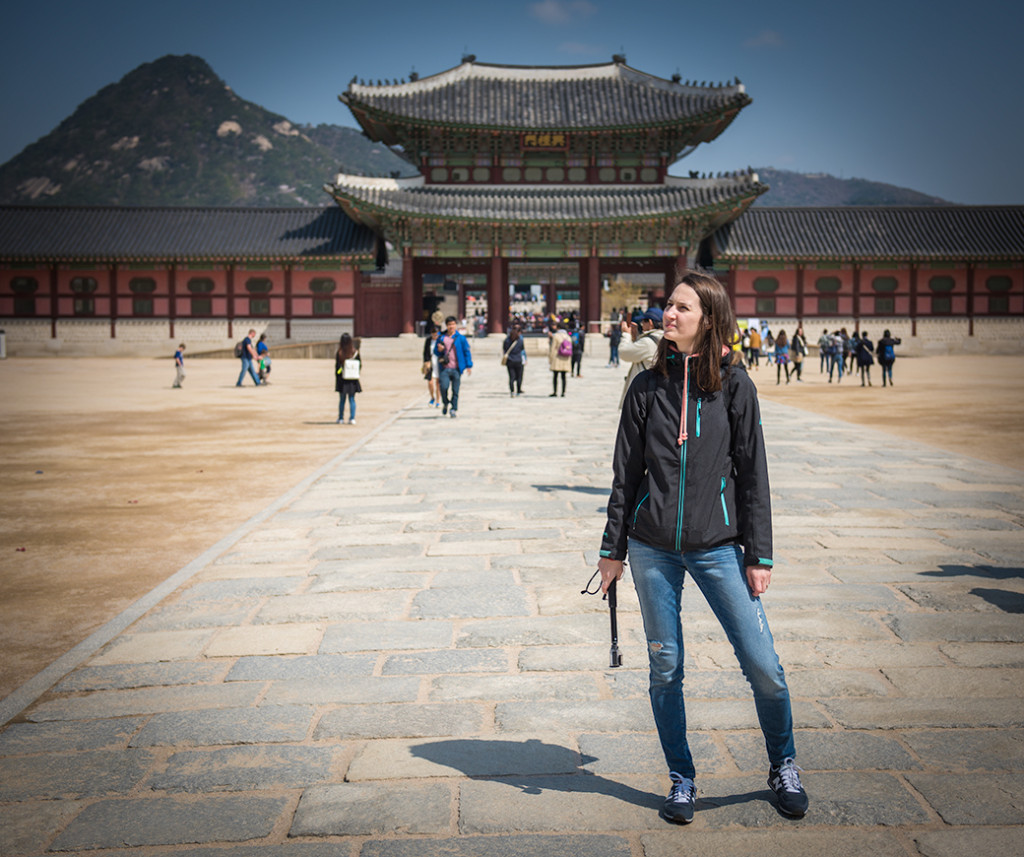 Plenty of people are in front of the palace. We try to take photos of the palace from other places then from the front. Somewhere with less people on the picture 🙂 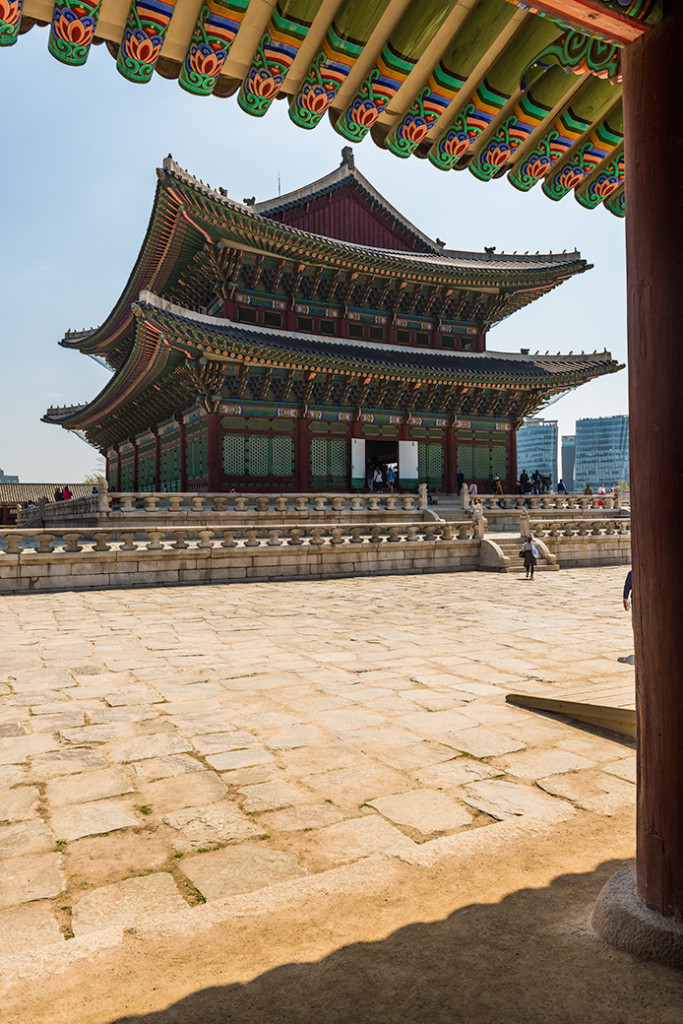 Palace is constructed from wood. Beams are predominantly in green color and decorated with beautiful ornaments. 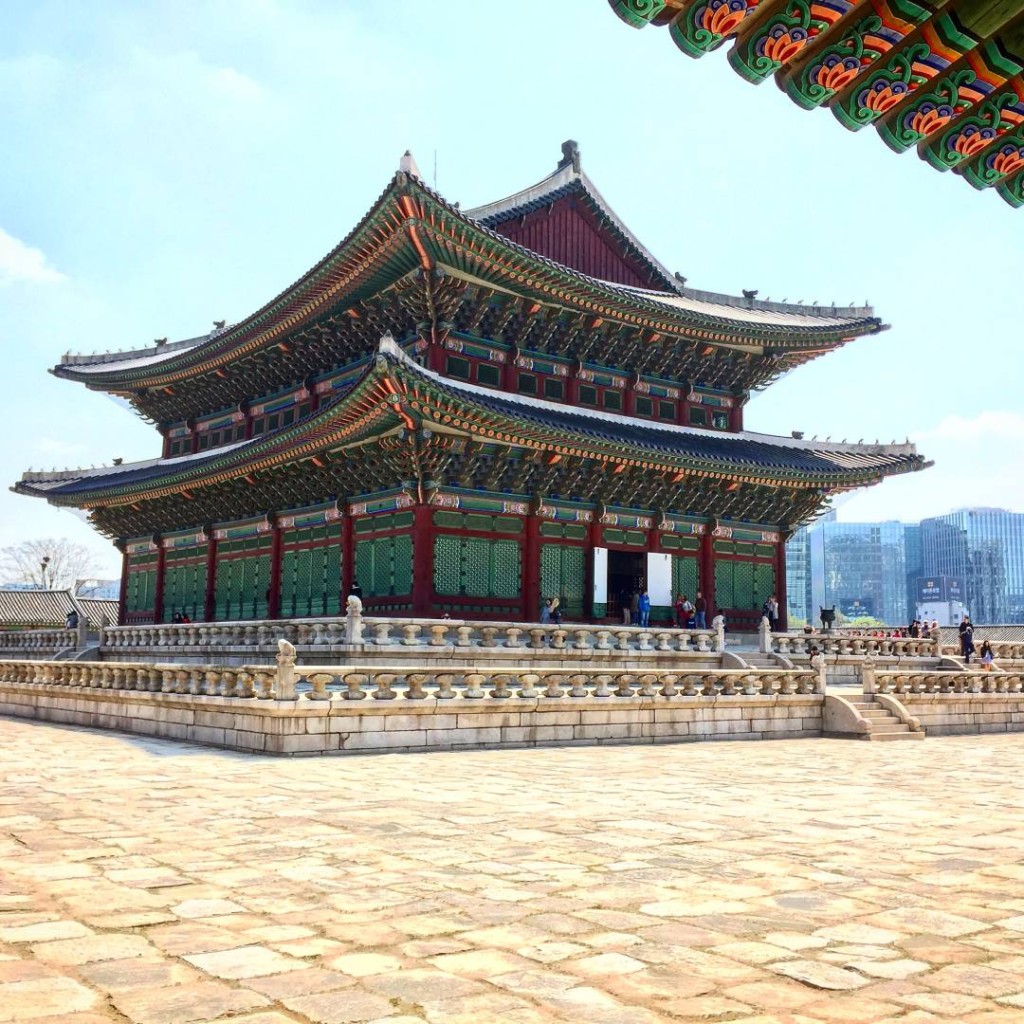 Entry to the main building is prohibited. However, you can take pictures from the doorstep to the interior. We are looking at the throne which had many generations of kings from the Joseon dynasty 🙂 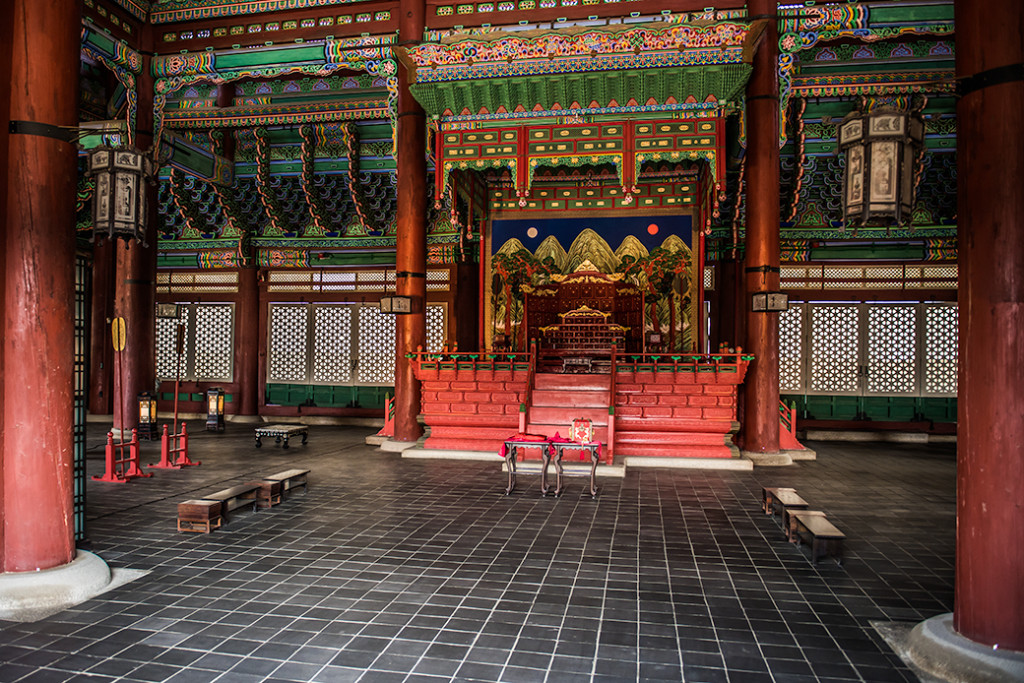 Interior of the Gyeongbokgung palace with the royal throne

Beautiful corners of the palace grounds

We are happy that the weather is beautiful. It’s ideal time for a stroll in gorgeous gardens. We visited  Seoul right during the cherry blossom (April). Amazing white-pink colour of blooming flowers made unforgettable atmosphere. 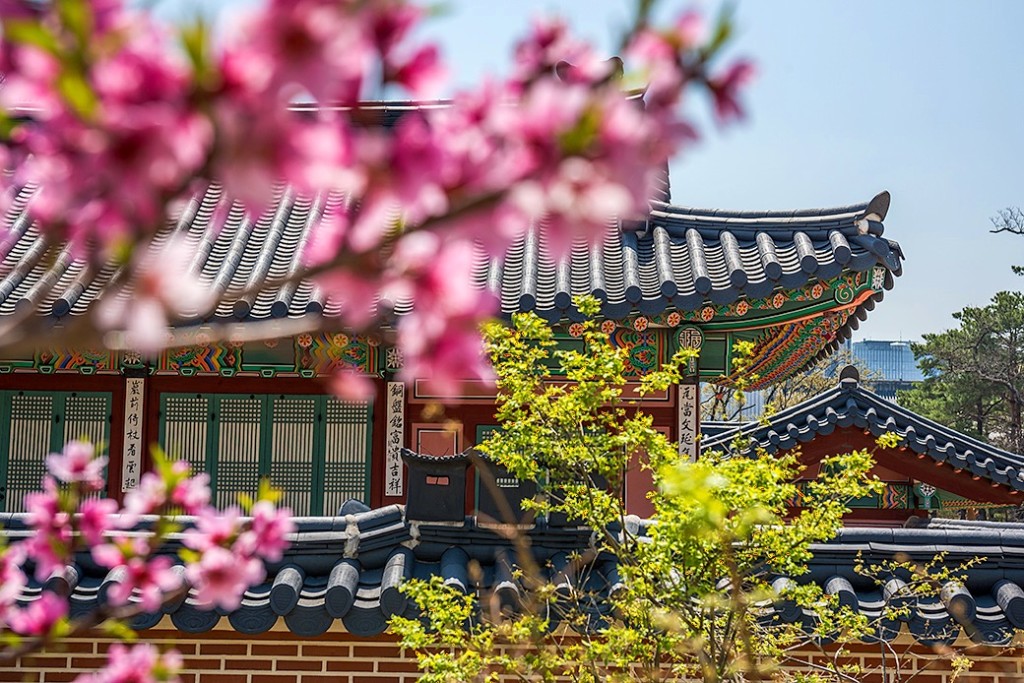 Flowers in the garden

From the main palace building we passed through the western gate. On the left side, there is a souvenir shop and a small cafe. On the right side, we can see small lake with interesting building. It is the Gyeonghoeru, royal banquet hall. The hall beautifully mirrors on quiet surface of adjacent lake 🙂 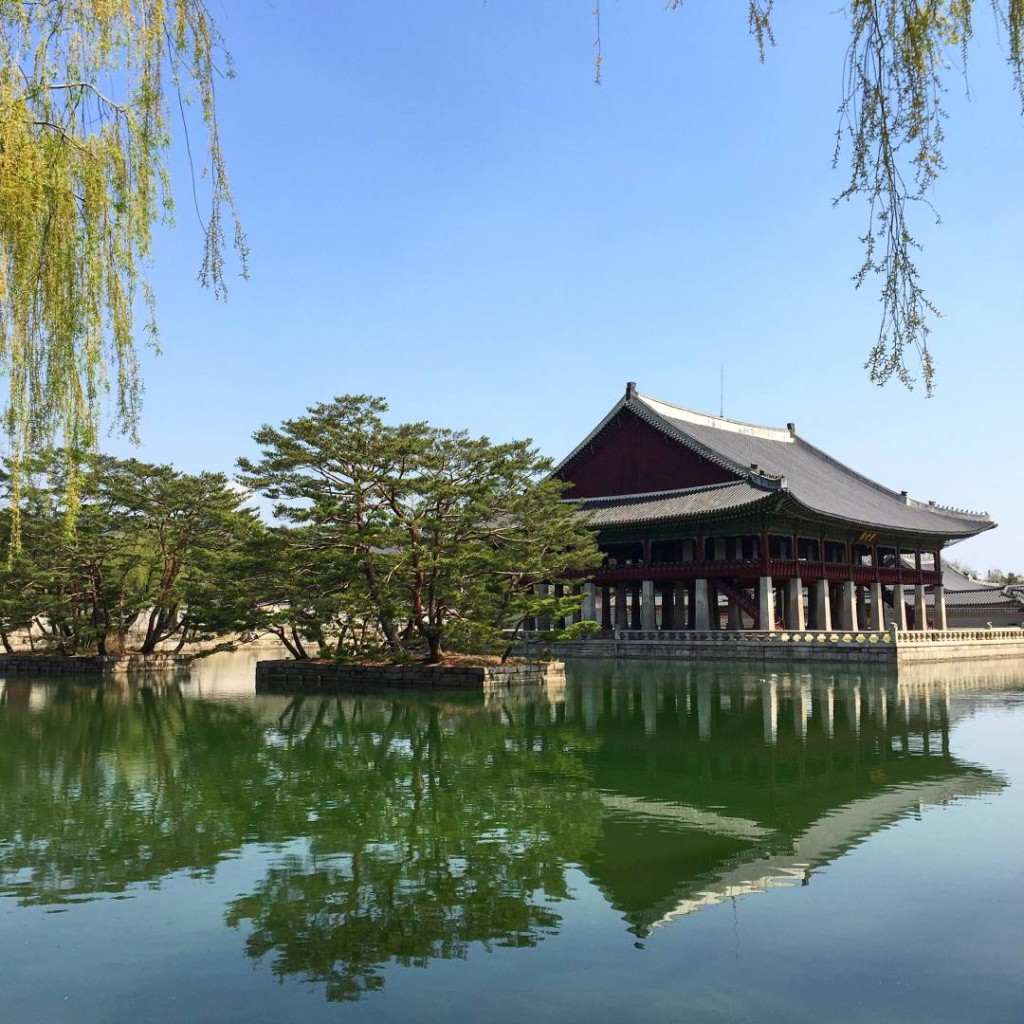 From Gyeonghoeru we continue further to the garden. We use nicely arranged pathways to walk to another architectural piece – Hyangwonjeong. 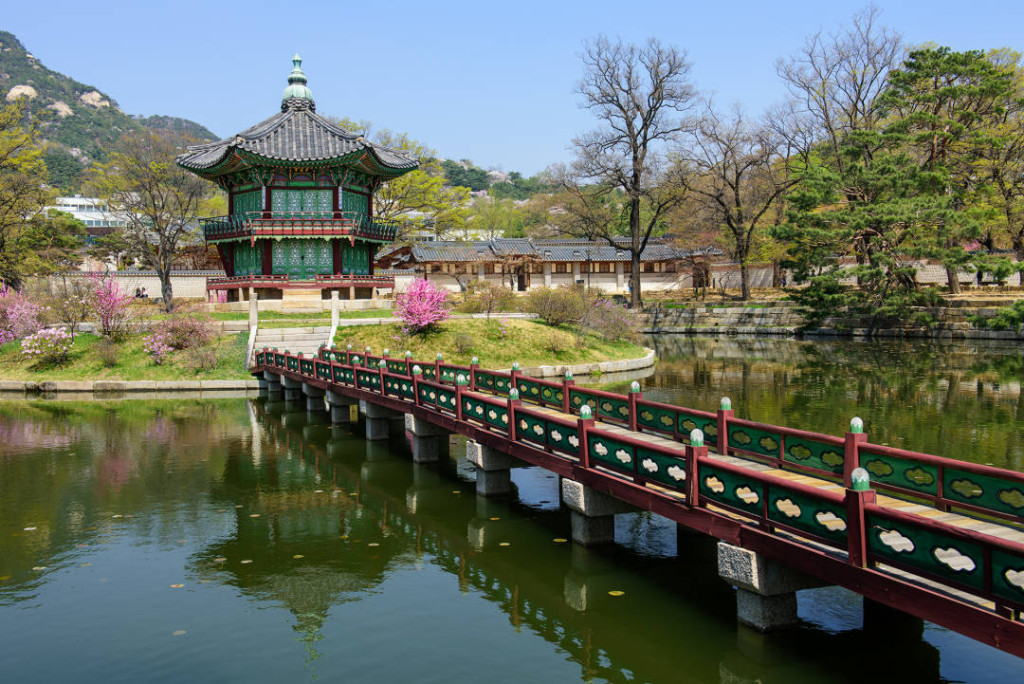 Beautiful corners of Gyeongbokgung – this building is called Hyangwonjeong

Hyangwonjeong is a hexagonal building constructed on an artificial island, built in 1873 on the order of king Gojong. A small but beautiful bridge connects the land with Hyangwonjeong. . 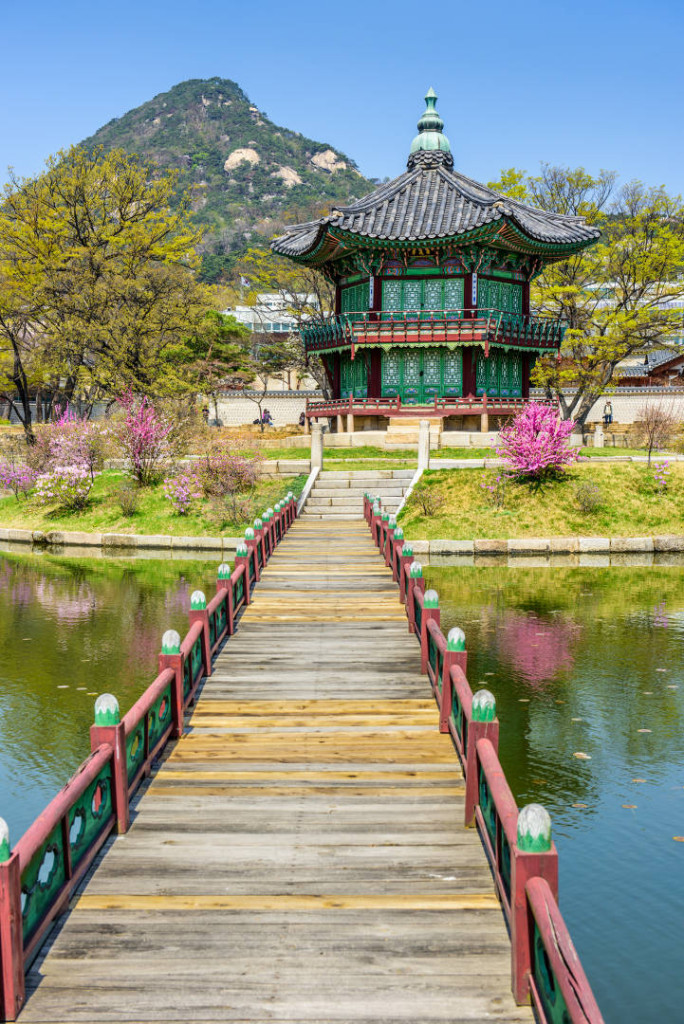 The whole palace area is vast and consits of several buildings. In front of buildings you find information tables (also in English) which describe their functions in the past. 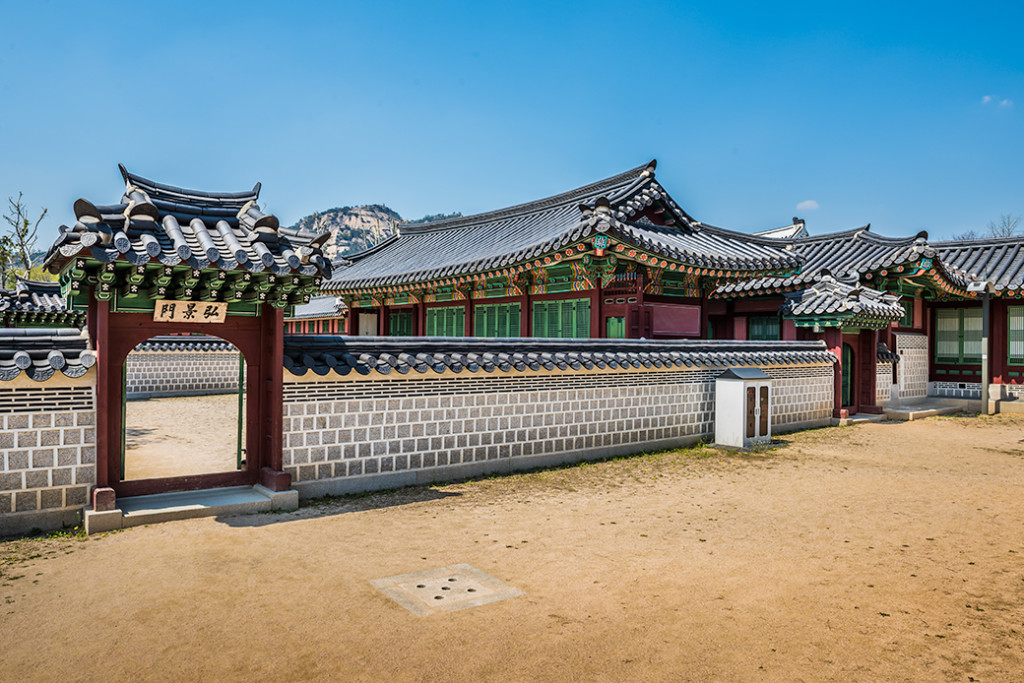 We spent 2,5 hours in Gyeongbokgung palace. We are leaving with full of impressions and heading to other interesting place in Seoul. But more on that in another blog 🙂